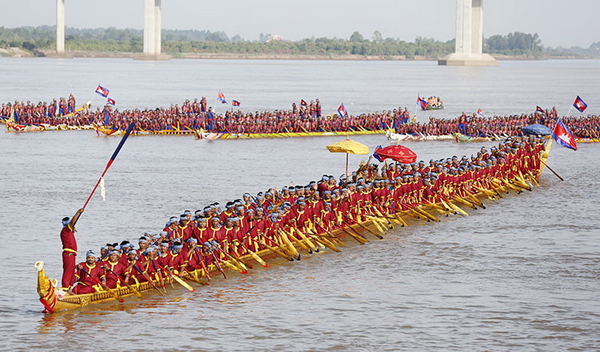 Cambodia yesterday set a fourth Guinness World Record by having the longest dragon boat which was certified at a ceremony in Prey Veng province.

Patel Pravin Jasmastbhai, a Guinness World Records representative, announced the record after experts examined the 87.3 meter-long boat. The previous record was held by China with a 77. 80 meter-long boat in 2016.

“After examining the length of the boat, and certifying that it was hand-built and can hold the most number of people while afloat, I am pleased to announce that Cambodia now has the longest dragon boat in the world,” he said.The boat, built by Union of Youth Federations of Cambodia, is 1.99 meters wide and can accommodate 179 people. Work on it began in April. China’s boat could accommodate boat 168 people.

“I praise Cambodia’s youth for their initiative in building the boat and promoting national unity while doing so,” he said. “Breaking a record is not easy because it requires initiative, strong will, a united effort and endurance to do so.”

Sar Sokha, a UYFC representative , yesterday said that this is the fourth record Cambodia has set so far, after it nabbed the longest krama scarf, biggest Madison dance and the largest sticky rice cake.

In July, the world’s longest krama was woven in Phnom Penh, measuring in at 1,149-metres; in 2015’s Khmer New Year festival in Siem Reap, 2,015 people danced the Madison; and in 2014 a two-tonne sticky rice cake made the grade.

“This win is a victory for all Cambodians and unites us,” Mr Sokha said. “The youths involved spent time studying the traditional way to build a Khmer-style dragon boat.”

Yem Yon, 32, a Prey Veng resident, yesterday said he has never seen such a long boat before.

“We have built boats since ancient times and our boats are famous for winning Water Festival races,” he said. “I have seen boats up to 10 meters long, but this one is very long.”