GENERAL
There is an excellent up-country network of roads in North Thailand. 90% of the roads, asphalt or gravel, are good.

Traffic is on the left and light generally. In the immediate vicinity of the main towns it can sometimes be a little heavy.

Experienced riders or those used to riding long distances or long hours should not have any trouble touring.

Inexperienced riders those who don’t normally ride a motorcycle, or those without experience riding longer distances / hours can find the winding mountain roads tiring after a few hours; however this is all relative to the individual rider’s general fitness and health. 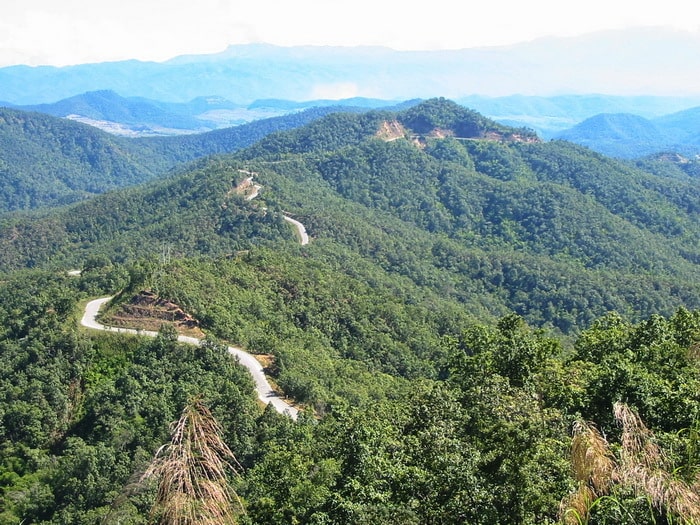 An exhilarating road R1263, just a small part of the amazing road network of North Thailand.

RULES OF THE ROAD
Are not unlike those in the West, but in accident situations the crucial factor may be which vehicle ran into which vehicle, not necessarily which vehicle caused the accident; the logic being that you should watch were you are going.
Look here for the traffic law.
For road signs look here
For some Safe Riding Tips look here.
For some Tips Riding as a Group look here.

A fun road to ride. The Rak Thai road.

SPEED LIMITS
Are lower than those in the West with the locals generally driving slower. Through the towns and villages 40 KPH is the normal speed limit with 90 – 100 KPH the limit on the open roads. These are not strictly enforced, so stay alert and you’ll stay upright.
Note that if you ride at faster than 80 kph, then you need to pay attention to the road, and don’t have time to look at the scenery.
On 4-lane dual carriage ways, the speed limit is sometimes higher at 100-120 kph. In practice on the “4-lane supers” almost anything goes, which is ok if you’ve got the right bike and are personally capable of riding a higher level. Just remember that the locals are not looking for other vehicles travelling at speed, and so tend not to look too far down the road – you’ve been warned! 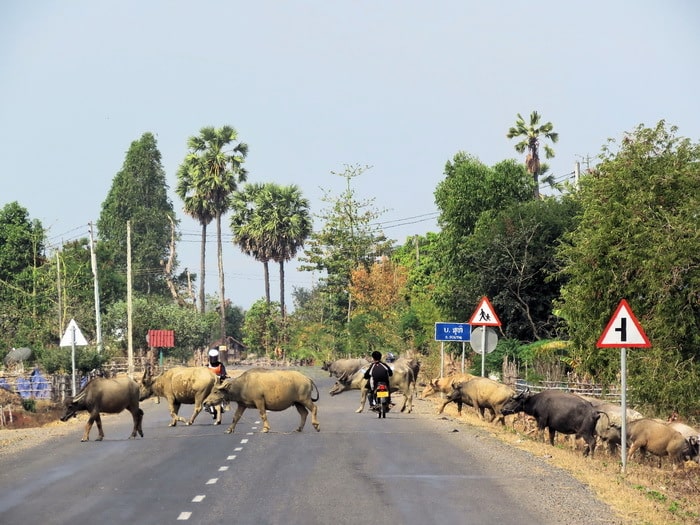 Riding in Laos & on remote rural roads livestock can be a problem.

DISTANCES
Travelled in a day are not great. First time tourers should only expect to comfortably ride 150 – 250 kms per day, if they want to see something. More than this & you need to be riding quite hard, paying attention to the road and traffic, and not the scenery, with little time to stop, take photos and explore. The main reason for the small distances is a slower travel speed. On the winding mountain roads, average speeds are down to 40-60 kph, riding hard! Don’t kid yourself that you can come & ride hundreds of kilometres, at speed (120kph +), in a day like you might do in Aussie, the US of A or in the EU. 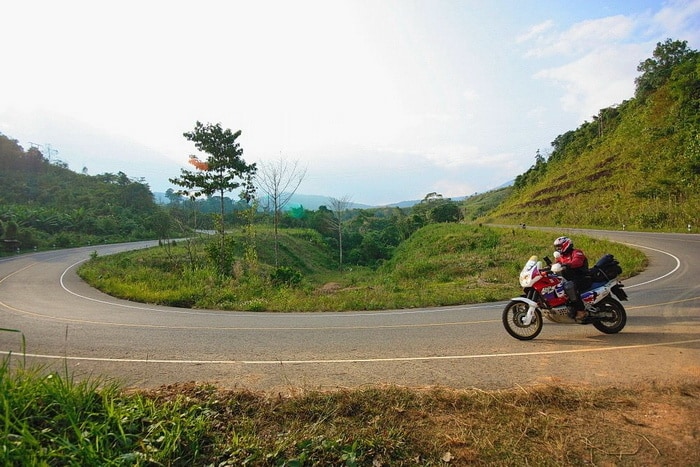 On the charge tackling the amazing roads of north Thailand.

HOLIDAYS
The roads can be busy during holidays or festival times.
The busiest periods of the year are:

Due to the volume of traffic on the road and heavy accommodation bookings, these periods are not the best times for touring Phi Ta Khon festival in Dan Sai. Rooms are always at a premium & you need to book in advance.

New Year Warnings : both Western New Year (31st December – 1st January) & Songkran (Thai New Year) are seriously bad times to travel by motorcycle & are definitely not recommended.
Thousands of Bangkokians head for the mountains of North Thailand over the western New Year. e.g. Travel to Pai 140 kms from Chiang Mai normally takes 2 – 2 1/2 hrs, but at New Year it can take 4-5 hrs with hundreds of cars on the R1095. Traffic on the mountains of Doi Inthanon, Doi Ang Khang, Doi Mae Salong, Phu Chi Fah, Doi Phukha is horrific; & at Doi Inthanon, Doi Ang Khang & Phu Chi Fah it is sometimes one way up / down at certain times of the day.
At Thai New Year in April, Songrkan & the water festival, the death toll is horrific with thousands of cars & drunken drivers on the road; it is totally dangerous with buckets of water thrown forcefully, & often purposely in your face. During both these New Years, hundreds of people are killed in traffic accidents over just a few days! Don’t travel at Songkran – stay home. 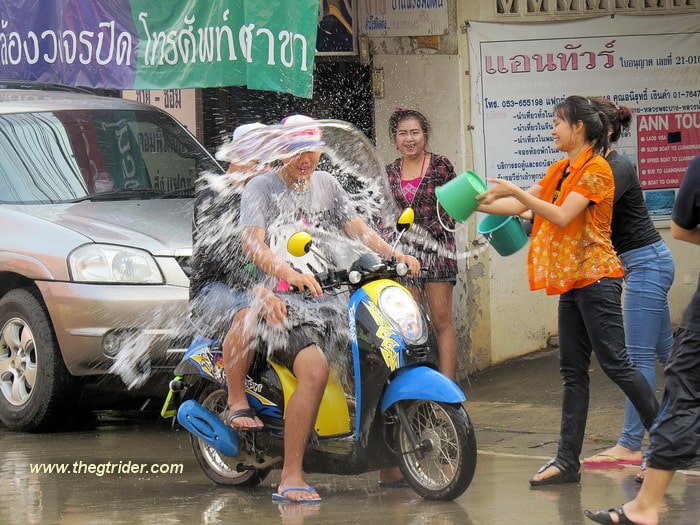 Songkran water festival is the most dangerous time to be on the road.

Other public holidays, which could also mean busy long weekends, are: 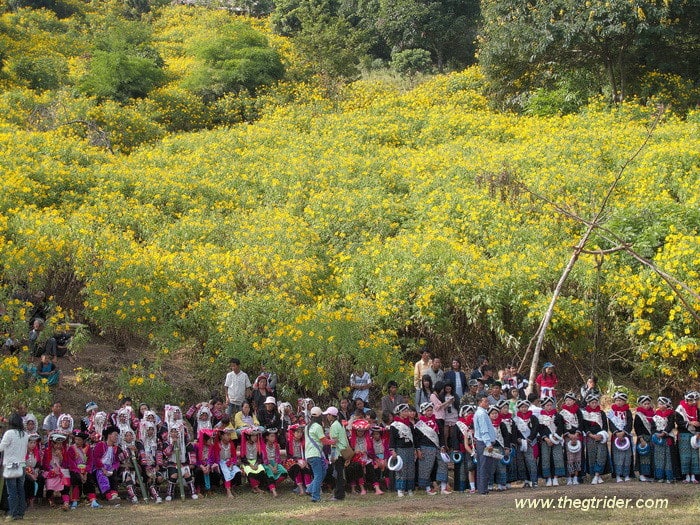 Flower Blooming Festivals
Thailand has an abundance of beautiful flowers. At certain times of the year in certain provinces the local flowers turn on a breathtaking spectacle of colour. Traffic can be busy in these areas.
Watch out for
January
• Wild Himalayan Cherry at Phu Lom Lo, Dan Sai district in Loei province.
• Chrysanthemums at Wang Nam Khiao district, in Nakhon Ratchasima.
• Tulips at the Flower Festival in Chiang Rai. 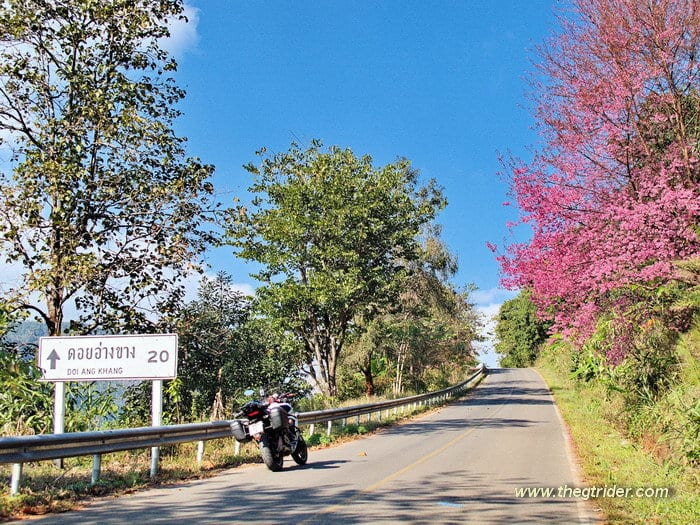 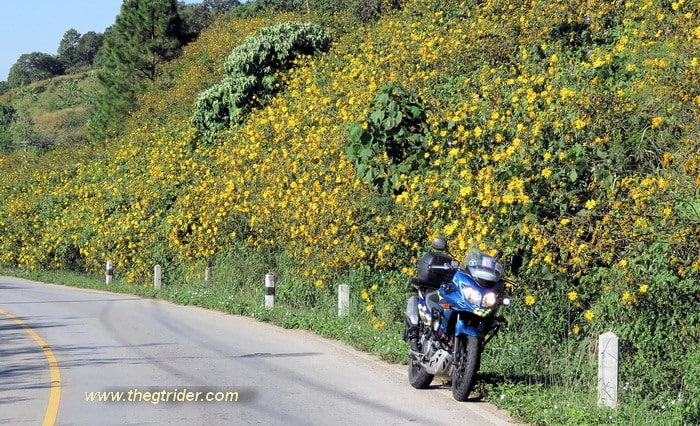 In general the roads are good, and generally up country, away from the big towns they are almost deserted.

An deserted, exhilarating road in Nan. Waiting to be ridden

With the road surface, watch out for changes in the road colour, which might indicate a more slippery surface. Warning signs are seldom posted for sand, oil, or loose stones on the road (and you can’t sue anyone for negligence here.)

Hot Season – hard riders should beware of asphalt with a very smooth, shiny black appearance, as this can be quite slippery. Not easy to pick out, it is often present where heavy cornering has occurred and the road metal has separated from asphalt with a build up of tyre rubber leaving a slippery surface. Motorcyclists cornering hard on this surface should be careful not to get into a slide. Also in the heat slow heavy vehicles often leave oil slicks on the steeper inclines, so watch out for these too.
Steep mountain roads – watch out for large rocks left on the road by the drivers of large vehicles. These are often used for putting under the wheels when stopped on the steep slope. I’ve had good personal experience of this, and it was both costly and painful. The lesson learned – don’t follow too closely behind the vehicle in front of you, or you won’t see the hazard on the road ahead!
After Wet Season – some of the asphalt roads are potholed, but they are usually repaired within a few weeks / month. 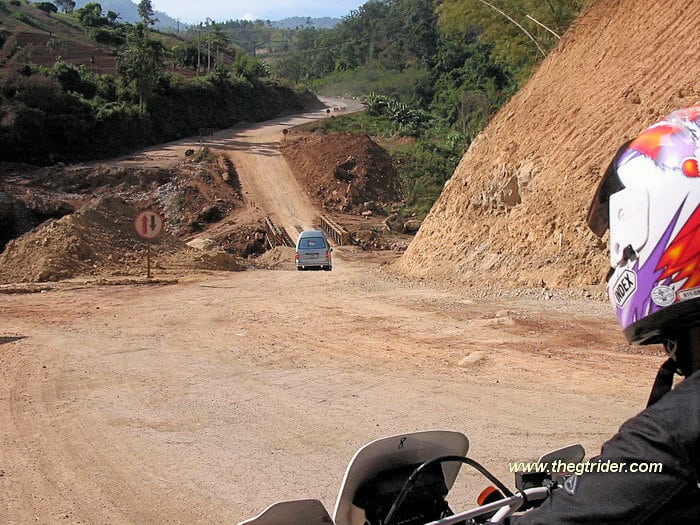 Cold Season – water seepage can make some asphalt roads damp and slippery. This often occurs in well-forested areas and is noticeable in the mornings, mainly on the Mae Hong Son loop; but it also occurs on the main Chiang Mai – Chiang Rai highway (specifically 55 kms north of Chiang Mai), as even GTR has found out.  The danger  period on R118 is early morning, before 11AM before the sun warms up the road. 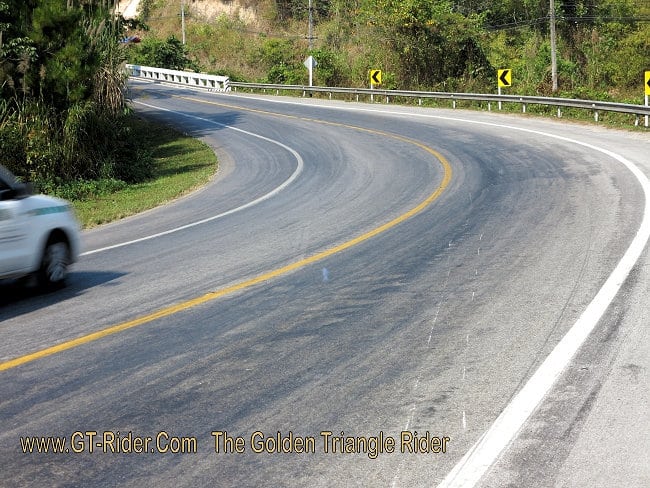 Check out the Top Ten Roads in North Thailand. 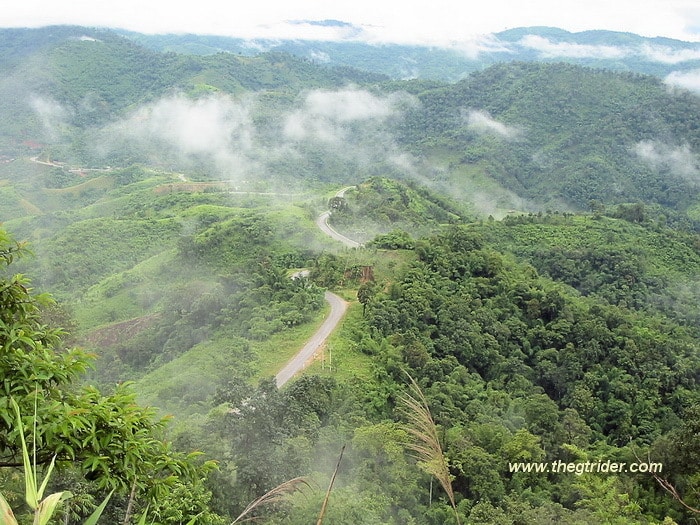 DIRT ROADS
Inexperienced dirt riders can find the steep and winding dirt roads tricky. On steep roads, remember it is easier going uphill than down. Excessive use of the front brake can cause you to lock up the front wheel, get into a slide, lose control and maybe fall off. If you are riding a four-stroke bike, you have the advantage of engine braking. Use this along with the rear brake when descending; staying off the front brake and it is a lot safer.

Exploring dirt tracks when you are going down a very steep slope, just remember that there may not be another way out and that you might have to turn around somewhere on the steep slope and come back out the same way. This may not always be that easy if you are alone. We’ve been caught out before, and it does help to have someone else with you.
Wet Season – dirt roads can be difficult with mud, water and ruts. This is not such a problem at the start of the rainy season, but it can be by the end of the wet (late August – September) when the ground is waterlogged and the roads are very muddy and slippery. Riding in these conditions can be tough, especially if the roads are steep, making them very challenging and time consuming.
Inexperienced dirt riders should note that riding through the puddles, the ruts containing water or on the grassy roadsides can help clean the tyres of mud and sometimes make riding easier.
Dry Season – starting from late October – November the dirt roads dry out, first as baked hard mud, ruts and ridges; then as the dry weather and heat continue the surface breaks down with the roads becoming quite good smooth dirt for a couple of months (generally December – January).
In thick dust don’t ride too close together, as you can’t see anything, and the dust can quickly clog up the air filter on your bike.
Steep muddy slopes when and if you get stuck & need help (a push) from your fellow riders, remember that the last one to ride up gets to watch his mates walk up behind him. 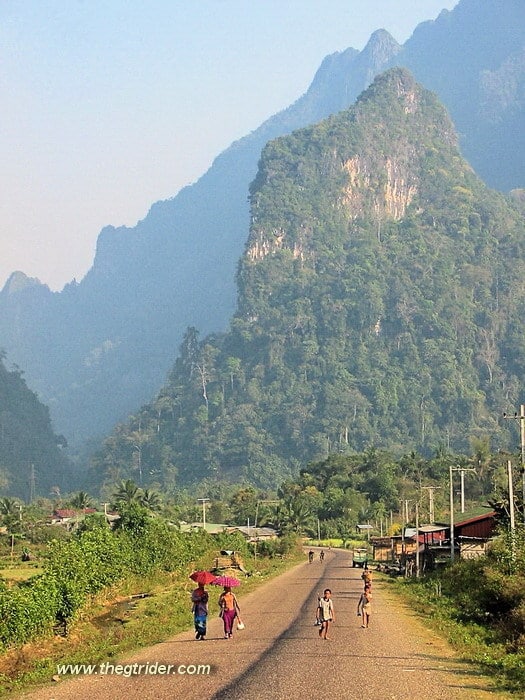 A gorgeous northern Laos road to to ride.

LICENCES
Officially, driving licences, either Thai or International, are required for driving; however, in practice most rental shops do not ask for them. A licence is necessary to obtain insurance when hiring a four-wheeled vehicle. If you drive without a licence and are involved in an accident you may automatically be the negligent party. Carry your licence with you to avoid this unnecessary complication arising. In Chiang Mai city the police are hot with licence checks on foreigners riding motorbikes. The fine is 500 baht & you carry on after paying the fine. Best to ride with a licence if you can.

The best insurance option for rental bikes is here.

Motorcyclists coming to Thailand should consider taking out personal travel / accident insurance before leaving home, this is sometimes free when purchasing airline tickets and tours with certain credit cards.

If you are in Thailand try these insurance options

GT Rider also has their own group health insurance should you wish to join for 12 months. 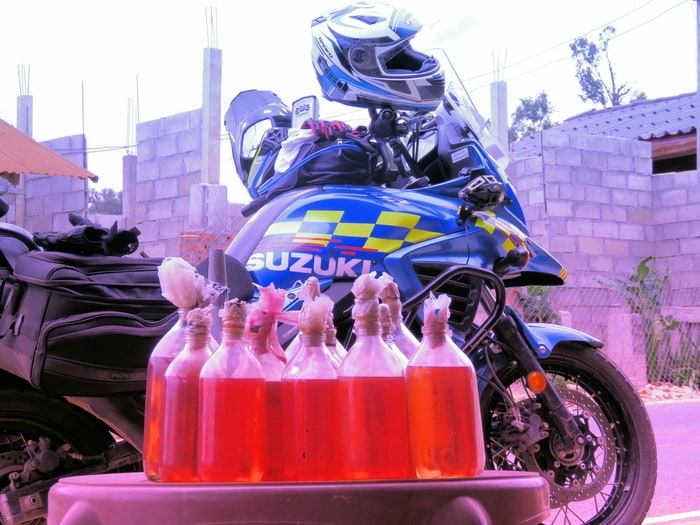