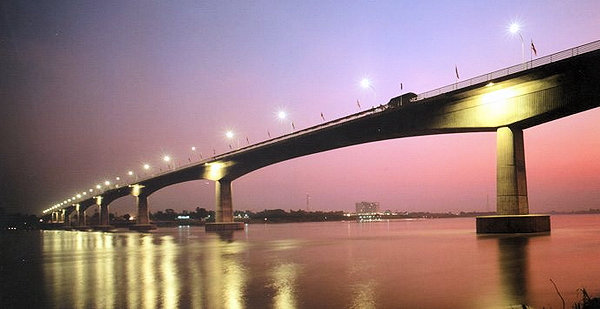 A 26-km road running along the Mekong River in the south of Vientiane is being paved with asphalt, with the work to be completed before the start of the rainy season.
The road upgrade is part of the Vientiane Flood Embankment Protection Project under the Flood and Drought Risk Management and Mitigation Project (FDRMMP).
The road is part of an embankment that protects the city against flooding. It also provides an alternative route for traffic travelling through the south of Vientiane and alleviates the load on Kaysone Phomvihane Road, which carries most vehicles heading for the southern provinces.
The Asian Development Bank is providing a low-interest loan of US$36.5 million to finance the FDRMMP project.
The road runs from the Vientiane-Nong Khai Friendship Bridge downstream through Huaymark-hiew and Khuaydaeng villages in Hadxaifong district before connecting to the main road running to Phao village in Pakngum district and on to southern Laos.
Project director Dr Khamchanh Vongxana told Vientiane Times on Friday the road would help to ease traffic congestion in the city, with many more vehicles now using this route.
“Although resurfacing has yet to be completed, many heavy trucks, especially those carrying cement and steel, are taking this route,” Dr Khamchanh said.
The upgrade is now 56.4 percent complete. An 8km section has been paved in Khuaydaeng village while another 6km section at Xieng Khuan Buddha Park will be re-surfaced by the end of April, and all of the asphalt will be laid before the rainy season arrives.
With a price tag of US$10.2 million, the road is being built to Asean standards and will be able to withstand loads of up to 11 tonnes per axle.
Once the road is fully surfaced, it will serve as a regular commercial route between Vientiane and the southern provinces.
Villagers living along the Mekong River, especially in Nalong village, are already using the road to transport their produce to Vientiane markets and are growing more vegetables and other crops.
It used to take them three hours to transport their produce to the city centre because of poor road conditions but now the journey takes only one hour.
The upgrade will also make it easier for visitors to get to Xieng Khuan Buddha Park, a popular tourist attraction located about 25km southeast of the city centre.
The Flood and Drought Risk Management and Mitigation Project has several components, including urban flood risk management, disaster risk management systems, disaster risk financing and insurance, project management, and contingency emergency response.
The project will not only reduce the effects of future floods on about 61,000 people, but will also enable farmers to boost agricultural production.