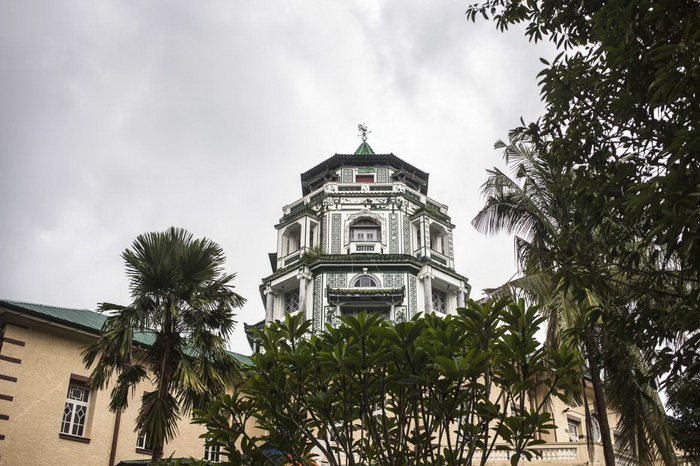 Empty and overlooked, the Chin Tsong palace is one of Yangon’s most eccentric landmarks.

IN 1920, French statesman Georges Benjamin Clemenceau visited the stunning mansion of Chinese businessman Lim Chin Tsong, perhaps for an evening of banter with socialites and tycoons over gin and tonics.

If Clemenceau returned for a visit in 2017 (probably after the 176-year-old had exhausted everything else in his Lonely Planet guide) he would be greeted by a few bored staff members of the little art gallery run from one of the drawing rooms.

The rest of the five-storey, green-and-white tower, visible over the trees of the Golden Valley neighbourhood south of Inya Lake, is empty – empty of the Rolls Royce cars, Persian rugs, porcelain vases and teak furniture that once adorned it. Save for a frog pond and wooden bridge, the lavish gardens are long gone, too.

Lim Chin Tsong’s creditors could not haul off the opulent moulding and murals by master Myanmar and English artists, so these have been left dusty and peeling within the darkened antechamber and mezzanine.

The property isn’t closed to the public (the entryway is tucked away under a flyover on Kabar Aye Pagoda Road), although most Yangonites recognise the Chin Tsong Palace only as a bit of unusual, Chinese-style architecture in the midtown skyline. 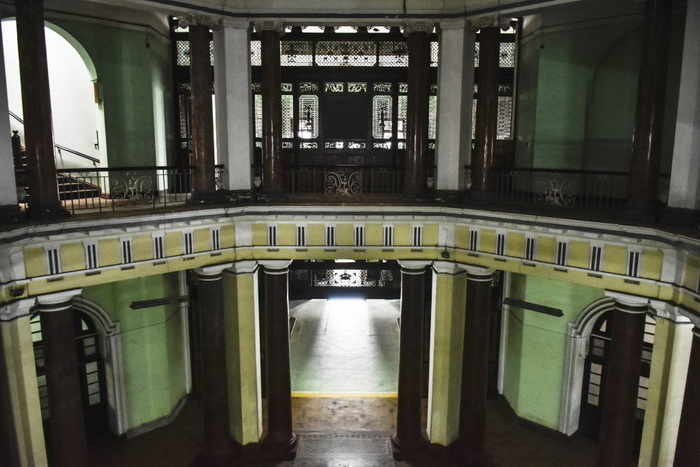 That legacy is not what Lim Chin Tsong had envisioned. The tycoon constructed the tower to crown his successful career exporting oil, rice and rubber from British Burma, which awarded him the Order of the British Empire for his World War I fundraising efforts, according to historian AJH Latham.

During Frontier’s visit, the manager of the gallery in the palace, the Myanmar Art Centre, recounted legends of Lim Chin Tsong: He kept a money press in the basement, they say, along with tunnels that drained to Inya Lake, where he would dispose of bodies. Lim would stand at the top of his beautiful tower, gazing out over Rangoon and lusting after it, but his sudden downfall came at the hands of his wife, an American spy. When he died his creditors lined his coffin with debt records.

Lim’s demise was swift, but likely due to economics rather than intrigue. Lim made a bold attempt to corner the rice market only to see the British ban exports of the crop to anywhere but India. He died a broken man in 1923, a mere five years after finishing his palace.

“So Lim Chin Tsong does seem to have come to a bitter end, but it is nice to report that the Lim Chin Tsong Polo Cup was still being competed for in 1927,” Latham wrote.

As for his tower, the structure passed through the 20th century somewhat awkwardly, inherited by regimes unwilling to tear it down but unsure of what exactly to do with the eccentric landmark.

During the Japanese occupation, it housed the All Burma Broadcasting Station, and in the 1950s it was reopened as a state guest house under the name Kanbawza Yeiktha, according to an Irrawaddy feature. In the late ’60s it became a hostel for female students at the nearby Institute of Economics and Rangoon Arts and Science University.

In addition to the Myanmar Art Centre, the Yangon State School of Fine Arts uses the lower floors as exhibition space. In 2014, the Ministry of Culture awarded the palace official heritage status and announced a full renovation for the site’s 100th anniversary in 2018.

At the time of writing, the upper floors of the tower remain locked, the century-old murals are still covered in dust, and the old palace is still dark and empty.

But the doors are open, in case the ghost of Georges Benjamin Clemenceau ever returns to Yangon.