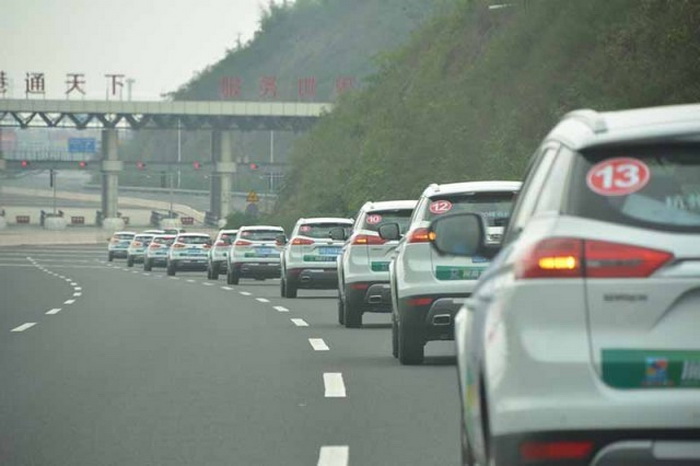 The thirteen-vehicle convoy, under the theme ‘Lancang – Mekong Culture and Tourism Friendship Caravan 2017‘ embarked on a 31-day trip on 24 September starting in Ningbo, Zhejiang province, China.

Mr. Yuthasak Supasorn, TAT Governor, said the primary objective of the trip was to highlight new overland cross-border adventures and to stimulate tourism via a road trip caravan.

“This promotes cross-border tourism cooperation through a friendship caravan, which can encourage more overland travel and enhance relations between the two countries. The link to other emerging destinations in the Greater Mekong Subregion also clearly demonstrates the potential of promoting ASEAN connectivity and strengthening relationships with our common neighbours.”

From Ningbo, China, the ‘Lancang – Mekong Culture and Tourism Friendship Caravan 2017‘ then travelled to Xiamen, Guangzhou, Guilin and Xishuangbanna (Jinghong) until 9 October before crossing the border into Thailand for the first of two routings. The first goes through Chiang Rai, Phayao, Phrae, Phitsanulok, Phetchabun, Khon Kaen, Nakhon Ratchasima, Prachin Buri, Bangkok and Chachoengsao before crossing the border at Aranyaprathet for a four-day itinerary in Cambodia from 17 October.

The second route after re-entering Thailand will travel via Sa Kaeo, Prachin Buri, Buri Ram, Nakhon Ratchasima, Udon Thani to Nong Khai from 20 to 22 October before crossing over the 1st Thai-Lao Friendship Bridge to Vientiane, Lao PDR. for three days from 22 to 24 October.

Highlights of the trip included a launch ceremony on 24 September at Ningbo, China, followed by cultural exchange activities and tourism promotions on route in Ningbo, Foshan and Nanning. A welcome ceremony will also greet the friendship caravan when it enters Thailand at Chiang Rai on 10 October. This was followed by a reception, presided over by H.E. General Thanasak Patimaprakorn, Thailand’s Deputy Prime Minister, and cultural exchange activities and tourism promotions on 16 October at the China Cultural Centre in Bangkok.

Mr. Yuthasak added, “This trip does a lot to strengthen Thailand-China relations, which have traditionally been among the best in Asia.

“It will help heighten awareness for Chinese visitors who plan to travel around Thailand from China’s huge network of secondary cities. It also promotes cooperation between the public and private sectors while encouraging locals to take part in organising tourism activities, thus enhance Thailand’s positive image among Chinese travellers,” he added.

Past caravans include the ‘15,000 Miles from Altai to Suvarnabhumi‘ friendship caravan from 16 November to 13 December, 2015, that celebrated 40 years of diplomatic relations between the countries. This was followed last year with another highly successful trip that was organised under the theme of ‘Thai-Sino Culture and Tourism Friendship Caravan‘ from 22 August to 29 September, 2016.