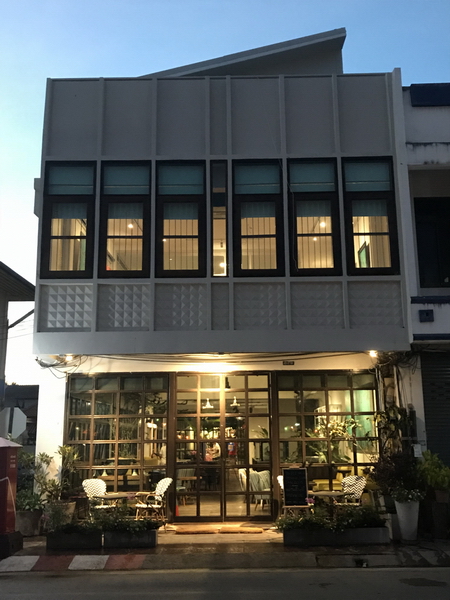 Lamphun gets some loving

Temple House, more than just an art gallery, aims to liven up the sleepy town – and maybe lower the suicide rate

SINGH INTRACHOOTO is an architect well known for designing eco-friendly buildings, and he had his work cut out for him when he tackled an existing 1970s-vintage structure in northern Lamphun province.

Success was duly achieved, though, with the opening of the art gallery Temple House, which promises to enliven the sleepy town of Lamphun itself.

Singh found his inspiration in Canadian-American architect Frank Gehry’s imaginative work in creating the Guggenheim Museum Bilbao in 1997. It too has had the desirable side effect of waking up the city of Bilbao in Spanish Basque country.

“It had always been an industrial area, but there was no activity at all after the industries closed down. So the Basque government decided to build a museum to restore the city’s vitality and serve as tourism landmark,” says Singh, who heads the Creative Centre for Eco-Design, part of Kasetsart University’s Faculty of Architecture and is the chief adviser of Research & Innovation for Sustainability Center (RISC).

Singh was originally mulling a project in many places including the southern Yala province that would have had the same rousing effect on the provincial capital, but the insurgency violence prohibited the effort.

He instead looked elsewhere for a locale with a long history, with an urban centre small enough to tour on foot, and with an established cultural identity. He looked for places with artists, organic farms and a population tending to older ages.

He also sought a place with social dilemma, and Lamphun is on record at the Health Ministry’s Mental Health Department as the province with the highest rate in Thailand.

It also has an art community, a remarkable history and more organic farms than anywhere else. But, in terms of tourism and things to do, it’s a backwater, drawing a fraction of the visitors that neighbouring Chiang Mai sees and fewer than even Lampang next door.

With most young people heading elsewhere to work, the remaining residents tend to be older and more prone to despair. Singh hopes Temple House will inspire local entrepreneurs to follow suit and spur activity in the town, which would in turn attract more visitors. When life is lively, fewer minds turn to despair.

“I was talking to a Lamphun native friend, Chaiyong Rattana-angkura, and looking at Lamphun for more than two years before I found just the right building – right opposite Wat Phra That Hariphunchai, the province’s best-known temple,” says Singh.

“The 70-square-wah site fit my idea of turning a shophouse into an art gallery, a place to socialise and a shop selling local crafts and farm produce.

“It’s a place for local residents to use and where visitors can see what Lamphun has to offer. At the same time, the province can expect more tourists.”

Singh and his partner Chaiyong bought the two-storey shophouse last year. They’ve maintained the original facade but completely renovated the interior, giving it a contemporary look and even adding a third floor, while ensuring that all areas are fully functional.

Respect for the environment is demonstrated in the use of recycled UHT milk and juice boxes in the roof, which is capped by solar panels that generate enough electricity (about 9,000 watts) to power the lights and other needs. Upcycled button scraps were used for counter tops. Re-purposed teak timbers are also seen in the interior.

Organic food and coffee are sold on the ground floor, alongside a handicraft workshop. The gallery is on the second floor, ready to host work by artists from near and far, and there’s a bedroom if anyone’s spending the night.

The third floor has more space for visitors staying longer, and two cottages are also available out back.

After a year’s labour, Temple House Lamphun will have its grand opening on January 20 with a “Lamphun Bloom” theme.

Its inaugural exhibition will celebrate the 80-year career of celebrated painter Charoon Boonsuan, who was born in Singburi but is married to a Lamphun native and has worked there for more than 40 years.

On view through March will be 34 of his floral paintings, adding to the town’s blossoming. On January 21, Thanachai “Pod” Ujjin of Moderndog will perform in Charoon’s honour.

The first floor will have displays of Lamphun traditions and visitors can buy the favourite local curry, kaeng hung ley pa sang, distributed in new packaging designed by the Temple House team. There will be locally grown Sawasdee-brand longan fruit, honey made from longan flowers and even coffee honey, as well as Don Long cotton, locally woven silk and Chun Long ceramics.

Chaiyong says 11 different community enterprises will have their products on sale in the shop.

“We’ve helped some of them with package designs and we also designed Don Long bags and shirts. It’s a way of improving traditional products so they better match the modern lifestyle and will sell better. There’s no loss of tradition in it.”

Chaiyong, who’s now 50, says his home province benefits from multiple cultures and produces all the agricultural produce Chiang Mai and other neighbours need, but few outsiders are interested in visiting. Most tourists swing down from Chiang Mai for a day, see Wat Phra That Hariphuchai, and then head back.

“We hope Temple House will challenge Lamphun people who’ve gone elsewhere to return home and will inspire others to open businesses that will make the province more lively,” Chaiyong said.

Singh says if, within three years, the province has more lifestyle shops, coffeehouses and tourists staying longer than a day, “that means our idea has been a success”.

“And, if it’s a success, we believe other provinces and cities will do the same. It’s a way of helping all communities improve the local quality of life with local specialties. This is my goal.”

FOR THE LOCALS, FOR THE FUTURE

Temple House Lamphun is at 102 Inthayongyos Road in Muang Lamphun.

It’s open daily from 7am to 7pm. There is no admission charge.

The art exhibitions will change every three months. Find out what’s happening at (065) 056 9839 or the “templehouselamphun” page on Facebook.

Lamphun’s population at the end of 2016 was 405,999, according to the Interior Ministry. The province has more than 4.5 million square kilometres.

More than a million tourists visited in 2015 and 539,000 in the first six months of last year, almost all of them Thais, says the Tourism Authority of Thailand. The 25,000 foreign tourists who visited came mainly from China, South Korea and Germany.