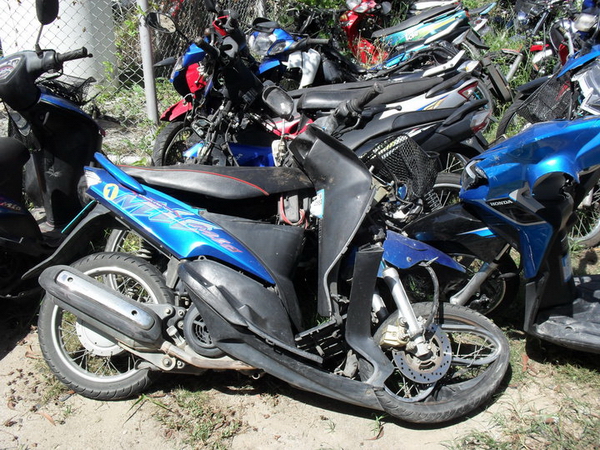 In 2015, Thailand’s road traffic death toll was the second highest in the world. Over 24,000 people were killed in road accidents, that’s 66 deaths every day. The tragedies plunged over 24,000 families into shock, grief, and anger over why so little has been done to make Thailand’s roads safer.
Last year, according to the 2018 Global Status Report on Road Safety, Thai roads became a bit safer. About 2,000 fewer people were killed on the roads, causing Thailand’s rank to drop from No.2 to No.9 on the world’s list of most dangerous roads.
Yet, one thing remains the same; road traffic deaths among motorcyclists in Thailand are still the highest in the world. It is estimated that crashes and deaths cost the country about 500 billion baht, or about 3%, of gross domestic product a year.
If Thailand wants to effectively reduce road traffic deaths, the policy focus must start with motorcycles.
At present, Thailand has more than 20 million motorcycles. About 70% of road traffic deaths come from motorcycle crashes and the numbers are steadily on the rise. The fatalities mostly involve young males in the 15-24 age group. While parents mourn the premature deaths of their loved ones, a rapidly ageing country loses valuable human resources.

But motorcyclists’ risky driving behaviours are preventable.
According to Royal Thai Police statistics in 2017, speeding, cutting in front of other vehicles, riding on the wrong side of the road and poor driving skills accounted for about half of the motorcycle crashes.
This speaks volumes about poor regulation and law enforcement, both in the failure to ensure riders are qualified and also to compensate the victims.
In 2017, the Department of Land Transport (DLT) reported that 37% of motorcyclists did not have driving licences and 34% of the motorcycles were not insured.

Unsurprisingly, more than 50% of motorcycle fatalities involved unlicensed riders. Most of them learned to ride motorcycles from families and friends, thanks to weak licensing policy and the public’s underestimation of risks.

Insufficient training time, a one-time paper test without a road test requirement and the lack of specific regulations for young riders are among the weaknesses of the DLT’s current licensing system for motorcyclists.
While regular training classes fail to produce qualified riders, the situation is worse for “big bikers” as they have not yet been required to pass specific driving and licensing tests.
There are many ways to strengthen motorcycle safety to prevent road deaths. They include stricter training, screening and licensing rules to produce qualified drivers.
Specific rules and requirements for high-risk groups such as youths and big bikers are also necessary. So is stricter legal enforcement.
Modern technology should also be used to monitor, evaluate, and punish the riders more effectively to strengthen traffic law enforcement. For example, there should be a national demerit point system and information linking system between the traffic police and the Department of Land Transport which has a driving licence database.
Repeat offences should also receive higher penalties.
In addition, safety equipment such as anti-lock braking systems and combined braking systems should be promoted or, better still, required. This basic safety technology could save approximately 6,000 to 9,000 lives a year.
Furthermore, state authorities must beef up vehicle inspection for annual reregistration as well as making car insurance a must. Road signs must be quickly improved to avoid road accidents and deaths, especially at U-turns and intersections.
Finally, the government should consider introducing separate or restricted motorcycle lanes in future urban planning.
While individual motorcyclists need to stop reckless riding, it is urgent to make the system work to create safer roads.
To reduce road traffic deaths comprehensively, however, policymakers should fix the problems that make people prefer motorcycles in the first place despite the high risks involved.
The lack of affordable, quality public transport. The traffic gridlock. The need for speed at the lowest cost. That’s why road safety takes a backseat.
The government needs to create an inclusive, affordable and safe public transport system that caters to all groups. If not, it is highly likely that Thailand will remain in the top 10 list of the world’s most dangerous roads for many years to come.