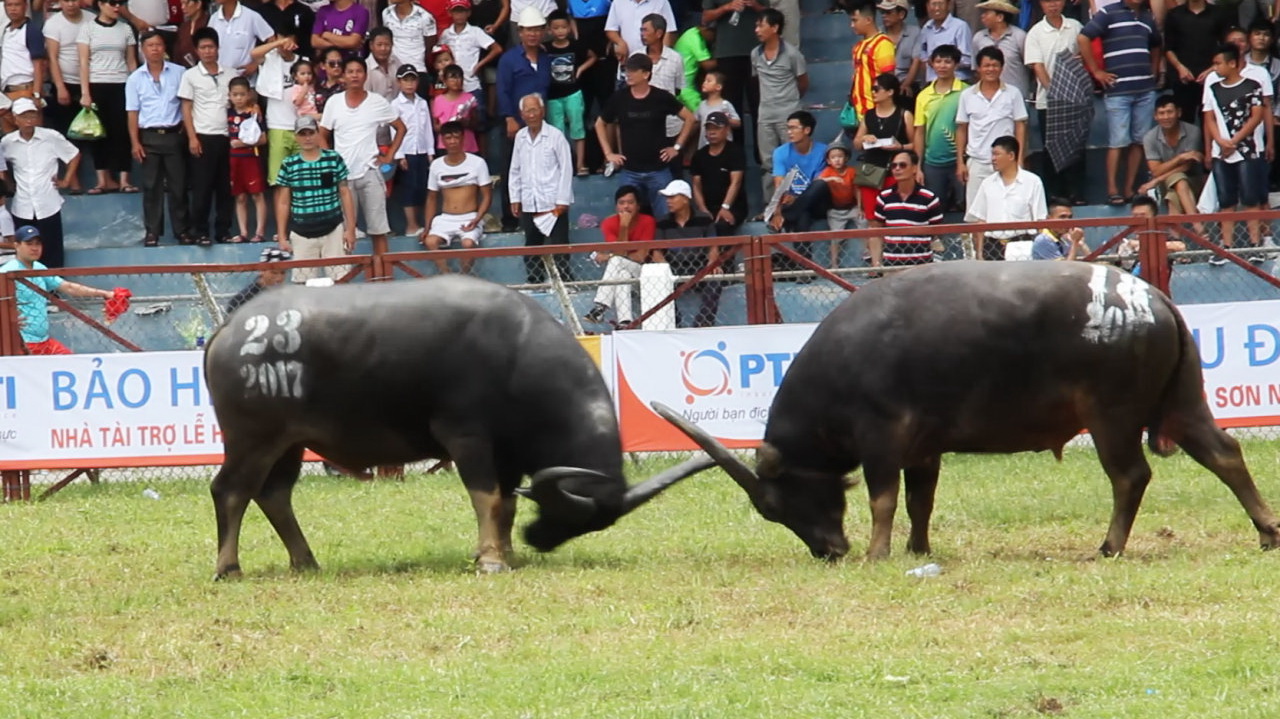 Two buffalo engage in a fight at the 2017 Do Son Buffalo Fighting Festival in Hai Phong City, July 1, 2017.

On Saturday, a man was mauled to death by his own buffalo that he had brought to the Do Son Buffalo Fighting Festival in the northern Vietnamese city of Hai Phong.

The decades-old festival is an annual spectacle where thousands of locals in Do Son District gather around a giant ring to cheer water buffalo as they are made to fight one another until a single contender is crowned the year’s champion.

The man’s unfortunate death was the first time in 28 years that there had been a human casualty at the event, which has long been criticized for its ‘barbaric’ and ‘cruel’ treatment of animals, as well as its disregard for the safety of spectators.

Elaborating on the festival’s origin, cultural researcher Nguyen Hung Vi explained that the festival stemmed from the observation of natural clashes between the large animals.

“Male buffalo fight each other on the paddy fields after a harvest season to determine who is the alpha male, the one which holds dominance over the females,” Vi said. “Based on the observation of these fights, people in the past have created a festival, accompanied by an imagined folklore and legend to explain its meaning.”

According to Vi, festivals where animals are pitted against each other are not uncommon across Vietnam, and can be observed in the form of rooster fighting, bird fighting, cricket fighting, and even fish fighting.

“They enriched the cultural life of Vietnamese farmers in the past, who spent most of their time working in paddy fields,” Vi explained. “Ninety-five percent of Vietnamese in those days were illiterate, so they relied on folk stories, folk songs and festivals as their sole exposure to the arts.”

Vi said that accidents were inevitable in every kind of sport, and that it all comes down to management to minimize the risk of such events.

“It was horrifying to witness the buffalo fighting ring at Do Son,” Vi said. “Buffalo owners accompanied their animals into the ring, and remained there even after the match had begun. The fences were rudimentary and would hardly protect the spectators from a charging buffalo. I think the festival should be temporarily banned until the necessary safety measures are taken.”

One of the most vocal proponents of keeping the buffalo fighting festival in Do Son alive is Dr. Tran Huu Son, vice president of the Vietnam Folklore Arts Association, who maintained that the event should not be banned due to one unfortunate incident.

“Many provinces and cities are looking for permission to organize their own buffalo fighting fests as a way of promoting tourism,” Son said. “If they were to become a reality, it should be carefully planned so that the local community benefits from the activity, not just a couple of businesses.”

Tradition is not an excuse

Meanwhile, Assoc. Prof. Dr. Nguyen Van Huy, former director of the Vietnam Museum of Ethnology, said it was not immediately possible to determine whether or not to put a ban on the entire festival based on one unfortunate event.

“Authorities should make use of this period of time during which the festival is temporarily halted to conduct a thorough review and strike a balance between maintaining local traditions and ensuring the safety of participants,” Huy said. “The organization of buffalo fighting for commercial purposes should be prohibited at all costs.”

Nguyen Tam Thanh, an animal welfare worker from Animals Asia, took a stronger stance on the issue, suggesting a blanket ban on all festivals that include violence against animals in Vietnam.

Provinces and cities that want to organize buffalo fighting festivals all say they want to preserve the tradition, but tradition should not be a front for clinging on to values that are no longer appropriate, Thanh said.

The Do Son Buffalo Fighting Festival, held yearly on the ninth day of the eighth month of the lunar calendar, is traditionally organized in the hope of wishing local fishermen a prosperous fishing season.

In 2013, the festival was officially recognized as a national intangible cultural heritage.

The event has been criticized by its opponents as being ‘barbaric’ and ‘brutal’ due to the fact that the water buffalo often suffer from serious injuries and even death after the fights.

The winning buffalo is usually killed immediately after being crowned champion, with the meat sold at a high price and believed to bring good luck to those who eat it.