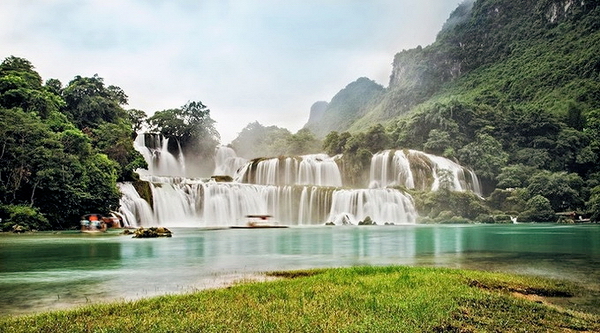 Non Nuoc Cao Bang has taken a step onto the international stage just two years after its establishment.

A park in Vietnam’s northern province of Cao Bang was named a new global geopark at a UNESCO executive board meeting on Thursday.

Non Nuoc Cao Bang is now the second of its kind in Vietnam after Dong Van’s karst plateau in Ha Giang Province.

“UNESCO Global Geoparks are single, unified geographical areas where sites and landscapes of international geological significance are managed with a holistic concept of protection, education and sustainable development,” the United Nations body said on its website.

Geoparks must possess geological heritage of international value to be considered by UNESCO.

Founded in 2015, Non Nuoc Cao Bang joins 127 other geoparks from 35 countries to receive UNESCO recognition for sustainable use of natural resources and awareness of geological hazards.

Seven hours northeast of Hanoi, the park covers 3,000 square kilometers on the border with China. Its collection of fossil, sediment, volcanic rocks and karst landscape is believed to illustrate 500 million years of the Earth’s history.

Tourism has long been a staple of the area, with more than 200 cultural and historical monuments.

Ban Gioc Waterfall, the largest in Vietnam, is one of the country’s most popular tourist destinations. Other appealing stops include Nguom Ngao Cave, Thang Hen Lake, and the Phia Oac-Phia Den eco-tourism area.

The country is currently establishing a network of geoparks. Aside from Cao Bang and Ha Giang, five other provinces are also planning to build their own.