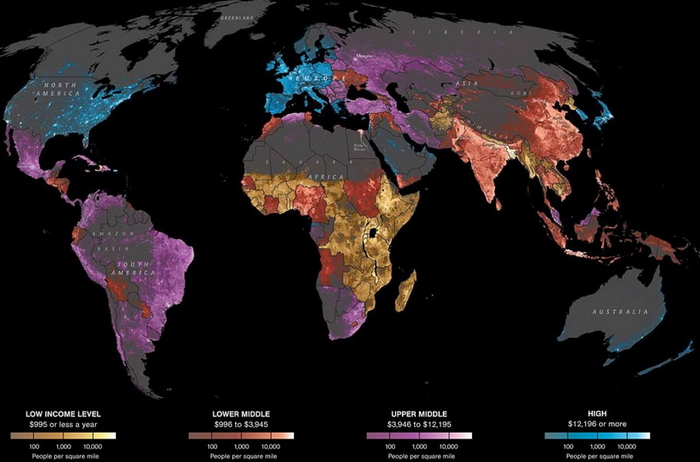 10 Maps that explain the world

Maps seemed to be everywhere in 2013, a trend I like to think we encouraged along with August’s 40 maps that explain the world. Maps can be a remarkably powerful tool for understanding the world and how it works, but they show only what you ask them to. You might consider this, then, a collection of maps meant to inspire your inner map nerd. I’ve searched far and wide for maps that can reveal and surprise and inform in ways that the daily headlines might not, with a careful eye for sourcing and detail. I’ve included a link for more information on just about every one. Enjoy.

1. Where the world’s people live, by economic status

Those dots represent people: the brighter the dot, the more people. The color shows their country’s average income level: blue is richest and yellow is poorest. I want to start with this map because it’s a reminder that the world is first and foremost made up of people; to me, the best maps are primarily about showing us people, not politics or geography. It’s also a way of looking at the divisions in the world other than by political borders; that’s a theme we’ll come back to. (One caveat to this map: it doesn’t show economic variations within countries, just the national averages.)

2. How humans spread across the world 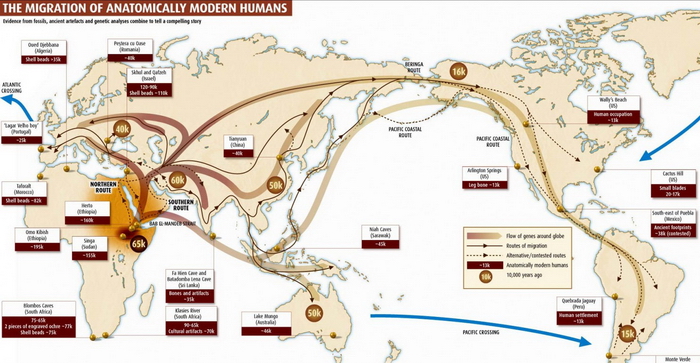 Human beings first left Africa about 60,000 years ago in a series of waves that peopled the globe. This map shows where those waves of migration went and when they occurred (the “40K” over Europe means humans arrived there about 40,000 years ago). You can see that humans have the most history in the Middle East, India and of course Africa itself (the map does not show the much longer history of migration within Africa). We are relative newcomers to the Americas, one of the reasons it has not until very recently been as densely populated as other parts of the world.

3. When the Mongols took over the known world

The Mongol conquests are difficult to fathom. Although their most important technology was the horse, they conquered much of the known world from China to Europe, a series of wars that killed tens of millions of people, then a substantial chunk of the world’s population. The Mongols also established what may well have been the largest empire in history until the British surpassed them six long centuries later. It’s difficult to understate how much we still feel their impact today; the country we know of today as Iraq has never fully recovered from the 1258 sacking of Baghdad, which until then had been a center of global wealth and knowledge.

4. When Spain and Portugal dominated the world

This map shows the Spanish and Portuguese empires at their height. They didn’t hold all of this territory concurrently, but they were most powerful from 1580 to 1640, when they were politically unified. Portugal would later pick up more territory in Africa, not shown on the map. We often forget that Spain controlled big parts of Europe, in Italy and the Netherlands. In the Middle Ages, Spain and Portugal were so powerful that they signed a set of treaties literally dividing up the globe between them. They became so rich so quickly that their trade with the Ottoman Empire, perhaps the other great imperial power of the time, filled the Ottoman economy with more gold than it could handle and plunged it economy into an inflationary crisis so severe that the empire never fully recovered.

This map shows British, Dutch and Spanish shipping routes from 1750 to 1800. It’s been created from newly digitized logbooks of European ships during this period. (Unfortunately, the French data is not shown.) These lines are the contours of empire and of European colonialism, yes, but they’re also the first intimations of the global trade and transportation system that are still with us today. This was the flattening of the world, for better and for worse.

Americans have mostly come around to accept that, despite what our grade school teachers may have told us, Europeans did not “discover” America; the original arrivals had done that 15,000 years earlier. But Europeans did discover lots of land that had never been before seen by human eyes. You can, embedded in this map, see successive waves of European exploration: first the Portuguese, then the Spanish, then the British and much later the Americans. The map’s creator, the always-insightful Bill Rankin, writes, “this map particularly underscores the maritime expertise of Pacific Islanders. Unlike the islands of the Atlantic and Indian Oceans, nearly all of the Pacific was settled by the 14th century.”

7. How countries compare on economic inequality

Yes, the United States has worse income inequality than Nigeria. That’s according to a metric called the Palma Ratio that measures economic inequality

It’s not clear precisely when the polar ice caps will melt completely. But if and when they do, sea levels will rise by 216 feet. This map shows what the world would look like then. Given how many people live near coastlines today, that’s not good.

9. Where the world’s 30 million slaves live

This is not some soft, liberal, by-modern-standards definition of slavery. This is slavery. There are 30 million people living today as forced laborers, forced prostitutes, child soldiers, child brides in forced marriages or other forms of property. There are 60,000 right here in the United States – yes, really. This map shows the proportion of each country that is enslaved. It’s highest in Mauritania, a shocking four percent, due in part to social norms tolerating the practice. A little more than one percent of people in India are enslaved, which translates to 14 million Indians living as slaves today.

10. Our globalized economy: What it takes to make nutella Put this map alongside No. 5 above, of European colonial-era shipping routes. This is the end product of today’s ultra-globalized economy. A simple jar of Nutella requires natural resources from four continents, vast manufacturing facilities in entirely different countries and a supply and distribution chain that spans the globe.