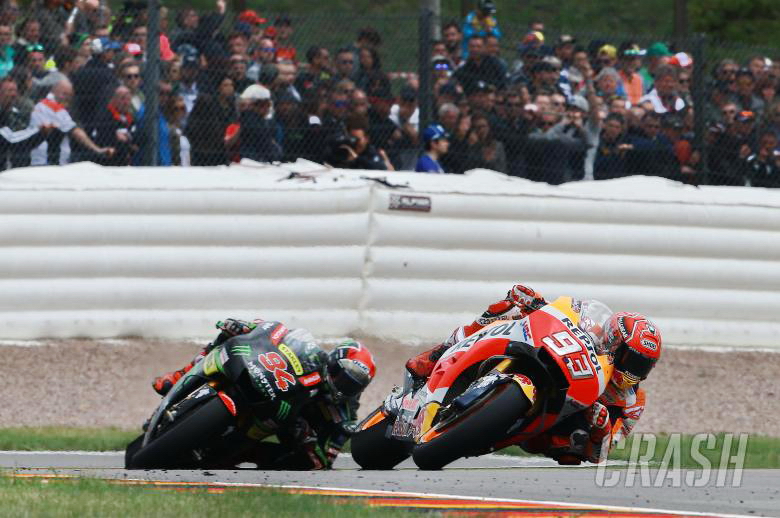 Want to know just what it takes to win in MotoGP? Jonas Folger has shed a light on the substantial talents of Marc Marquez, explaining how the current championship leader adapts his riding style over a race to match the ever-changing performance of his tyres.

The class rookie had an opportunity to witness Marquez’s race craft first hand during a spirited ride at his home grand prix at the Sachsenring, where he surprisingly shadowed the Repsol Honda man for the majority of the 30-lap race.

Folger went on to speak of how much he had learned from Marquez in the exchange, an encounter he recalled in detail after testing at Brno on the Monday after the Czech Grand Prix.

According to the German, Marquez had “four different stages” in the race. During each, he would adjust his style, adapting to the ever-decreasing grip offered by Michelin’s front and rear tyre.

And, incredibly, Folger described how Marquez – already a five-time world champion at just 24 years of age – would anticipate each stage, changing his approach, line, and body position two or three laps before a suspected drop in tyre performance arrived, to ensure the shift was as seamless as it could be.

“The best thing I saw was when he started to change his riding style, because I was always waiting until my tyre dropped,” explained Folger at Brno. “Then I was changing my riding style.

“He is doing this before. He knows already that, in two laps, my tyre will drop so he already starts to pick up the bike early, to save a little bit the tyre, so it makes the tyre’s life even longer.

“That’s what I saw from him and it was very nice to see. There were four different stages. You can see always one step, another step… He’s not just pushing until five laps to go and then changing. He’s already starting on lap six.”

And Marquez’s chameleon-like ability to adapt to the ever-changing behaviour of the conditions around him isn’t just limited to during a race. Considering an upcoming track, and how his bike is likely to react there, the 24-year old will adjust his riding style accordingly.

Take last weekend’s Austrian Grand Prix for example. Marquez’s breath-taking ability to plant his RC213V firmly on its nose and brake all the way into the corner has long been known.

Finding the ideal line to exit the Red Bull Ring’s low-gear corners, which open out onto considerable straights, was his focus, as was a revised body position when picking his bike up.

In the wake of qualifying in Austria, Marquez was not too keen to expand on just what he had changed, but revealed the prior test at Brno was a fine opportunity to work on bike balance, as well as his riding style.

“[It] Looks like in this race weekend honestly we are not losing on acceleration,” he said on Saturday, after securing pole in Austria. “We are the same like [our] competitors. We find a very good balance with the bike. For last year, I was losing much more, but I was riding without wings. I was riding with a completely different balance of the bike.

“[It was] Was really important Monday test in Brno because we start to prepare this race. [It] Looks like this year I am feeling better with the bike, better acceleration. Of course, I’m losing in other points and I’m struggling a little bit, but also I tried to adapt my riding style to the bike. I’m very happy and very proud to be fast on this racetrack.”

While Marquez didn’t give much away, fellow Honda rider Cal Crutchlow, who has access to the data of both Repsol Honda riders, was more than impressed with the reigning world champion’s change in technique.

“Normally, if you get the acceleration [here] you stay there [at the front],” he said after qualifying in Austria. “Marc’s been the king of it this weekend.

Honestly, how he’s improved since being here last year in acceleration…

“I think it’s a combination of both [improvements to the RC213V and Marquez’s riding]. But he’s riding fantastic in that area, really, really well. Getting the bike stopped, turned and getting it out. Normally that’s Dani’s [Pedrosa] strong point and he’s murdering Dani.”

Marquez’s considerable natural ability has never been in doubt. But recent races, and rivals’ comments underline the level of thought that goes into his riding. And, with podiums in each of the past five races, it is hard to imagine anyone stopping him in his quest for a fourth premier class crown.