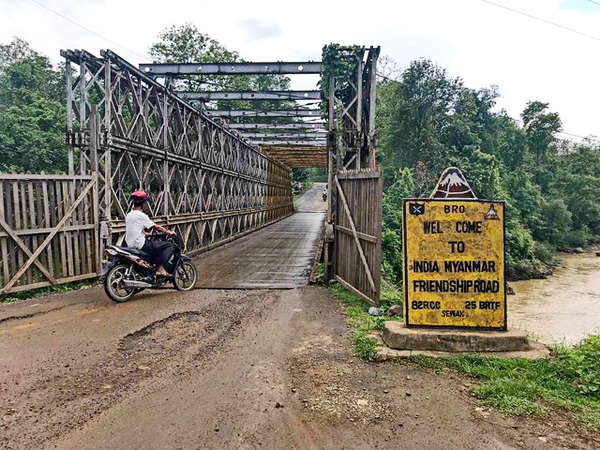 Mandalay – The long-awaited bus service to cross the India-Myanmar border through India’s northeastern state of Manipur is set to operate from April.

The 579-km service between Mandalay and Imphal, the capital of Manipur, will be the first bus link after 17 years of planning and government talks as part of India’s Look East policy.
Shwe Mandalar Express Co., Ltd, a bus line in Myanmar, and Seven Sisters Holidays Co., Ltd in India signed a memorandum of understanding at the Indian Consulate in Mandalay on Feb. 14.
“We’ve discussed this since 2018 with many delays because of the bilateral negotiations,” U Nay Lin Oo, the managing director of Shwe Mandalar, told The Irrawaddy.
The bus is expected to run once a week with 27-seater buses passing through Monywa, Gangaw, Kalay and Tamu in Sagaing Region. Passengers will have to complete border checks at the Moreh checkpoint.
At Moreh, passengers change to a Seven Sisters bus for the 140-km journey to Imphal.
U Nay Lin Oo said: “The bus route is controlled by the Manipur authorities and there are also discussions with the Indian army over security.” Shwe Mandalar said the fare would be around US$40 (58,000 kyats) and passengers would need a visa from the Indian Embassy in Yangon and the Mandalay consulate, detailing the travel itinerary.

The Indo-Myanmar Friendship Bridge at Tamu-Moreh border from the Indian side in June 2018. / Nyein Nyein / The IrrawaddyU Nay Lin Oo said the firm was hoping to implement the border arrangements within three months. Travel insurance, immigration and security issues were still under discussion, he said.
The plan was for buses to leave from Mandalay at 6 p.m., travel around 12 hours to Tamu and three more hours to Moreh.
The foreign tourists making the journey from Mandalay currently have to take a night bus to Tamu and travel to Imphal separately.
India is trying to establish closer ties with Myanmar.
The project was first suggested in 2003 and received a boost when the former Indian prime minister, Manmohan Singh, visited in May 2012.
Talks stalled over upgrades to the Mandalay-Tamu road and security concerns as Manipur struggles with northeastern separatists along the border.
The Indian Embassy said the direct bus link would boost tourism and trade and draw the neighbors closer.