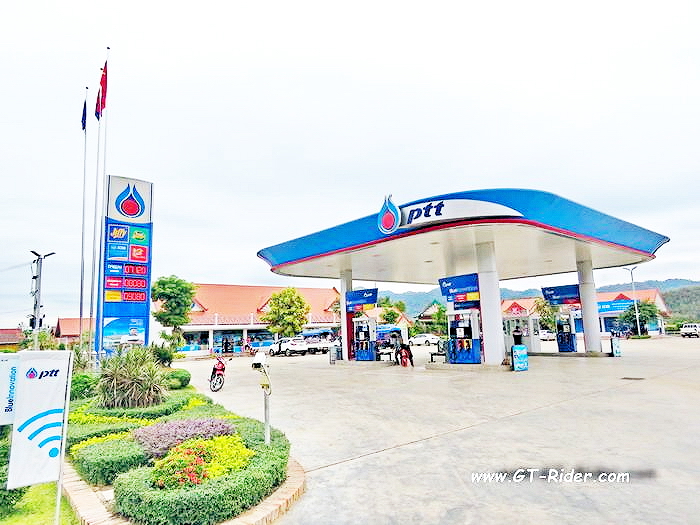 PTT which as set the bar for petrol stations in S E ASia is on a program to expand their network on a massive scale.

PTT Plc, the state-owned fuel supplier in Thailand, has plans for massive business expansion in Laos six years after entering the market of 7 million consumers.

In a recent interview with Vientiane Times, the managing director of the company’s Lao subsidiary, Songpon Thepnumsommanus, said the firm has plans to expand the number of its petrol stations from 45 units to 100 units by 2022.

The company’s business expansion plan is a response to growing fuel consumption and business opportunities to provide quality fuel and best services in Laos, he said.

According to him, the expansion of petrol stations will be based on direct investment by the Thai company and sale of its business franchise to local business partners who trust in the Thai business model.

The cost of a PPT petrol station franchise, excluding land, ranges between Bt15 million and Bt35 million, he said, adding the investment costs for local investors depends on the category of petrol station.

There are three types of PTT petrol stations – platinum, standard and complex. The platinum is the top petrol station model, which accommodates a number of facilities and services such as retail fuel distribution service, convenience store, coffee shop and bank unit. The following models have fewer features.

Observers say PTT petrol stations in Laos are able to attract local consumers who demand top quality fuel and best services. The Thai brand has been popular in Laos and this has made it easier for the firm to expand its businesses in the country.

In addition to the popularity of the brand, PTT has come up with business models that attract local consumers. The company not only wants to sell fuel but also services that make a petrol station a one-stop service where people can get many things, including dining and banking, according to local observers.

Apart from the popularity of the brand in Laos, PPT has developed a clear strategic plan and direction for expanding its business in Laos and the region. The company has already made forays into Cambodia and other Asean nations.

Songpon said he was pleased that PTT’s presence in Laos had created a new standard for the petrol station business in the country.