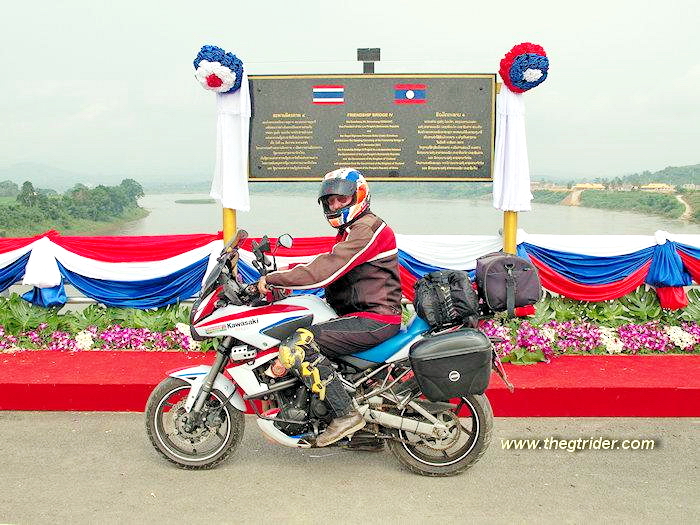 Friendship Bridge History:
The 1st Mekong Friendship was opened on April 8, 1994, it was the first bridge across the lower Mekong, and the second on the full course of the Mekong. Funded by the Australian government, construction cost A$42million.

When the bridge at Nong Khai was first opened the official policy was no motorbikes on the bridge. To get round this you had to truck your bike over the bridge, or get an official escort if you were a tour group. Eventually common sense prevailed & bikes were able to ride across the bridge.

However after several years open to motorcycles, the rule book was dusted down & Lao authorities in Vientiane “closed” the bridge to motorcycles without warning in Feb 2005.

When the three other Friendship Bridges – Mukdahan (December 2006), Nakhon Phanom (11 November 2011), & Chiang Khong (11 December 2013) were opened they were instructed to follow the official policy from Vientiane – no motorbikes into Laos across the Friendship Bridge.

In late 2011 the 1st Friendship Bridge at Nong Khai was again opened to bikes & remains open; but the other bridges downstream can still be problematic. Usually you cannot cross from Thailand, however the Lao often let you exit, (but not always).

The 4th Friendship Bridge at Chiang Khong / Houei Xai was opened on 11.12.13 & Thai immigration at first refused use of the bridge by motorcycles; however in March 2014 they started letting bikes across the bridge with an escort, for 1,000 baht. In 2016 the fee is now 500 baht. Exiting Laos across the bridge in February 2016 the fee on the Lao side was 200 baht = it goes up & down a bit, depending on the official.

Xayaboury Province became a problem for entering & departing Laos in September 2016.
Motorbikes & bicycles are banned from entering Laos in Xayaboury province at Muang Ngeun, Kenthao & Phu Doo. This ban was introduced by the head of the Xayaboury police. Discussions were held between the Xayaboury tourist office, governor & police to no avail. No motorbikes! I believe this problem arose from a group of Thai bikers taking photos at the Xayaboury dam site. They were asked to stop & leave the area, but refused. The head of the police was called & an argument ensued. The police won = get out, no more motorbikes in Xayaboury province, in or out. Too much trouble!
Xayaboury was again open October 2017 if you entered via a tour company, however exit via Kenthao still seems to be a problem in March 2018.

Vang Tao Laos / Chong Mek Thailand
In March 2018 there appears to have been a policy change on the Laos side. Riders have been refused exit from Thailand / entry to into Laos because of a new policy on the Laos side – tour groups only!

1-2 bikes cannot enter
3 bikes up need travel with agent / need tour permit riding in Laos
At the moment this appears to be a local Vang Tao / Champasak province policy only.

Laos customs say the problem has come from bikes entering but not be returning / re-exported back to Thailand. They are being sold; & / or there have been accidents with deaths & the bike not being returned. So no single or private entry at Vang Tao for the time being. With a tour group then there is a legal local guarantor who is responsible & if the bikes / vehicles are not re-exported then they are responsible. With single / private entry there is no local guarantor & this is where the problem has come from in Pakxe / Champasak – bikes vehicles not being re-exported because they have been sold off or crashed. The issue of these bikes not departing has made the Vang Tao customs most unhappy so they have set a ban on single or private entering. Tour groups only.

You can read more on GTR here