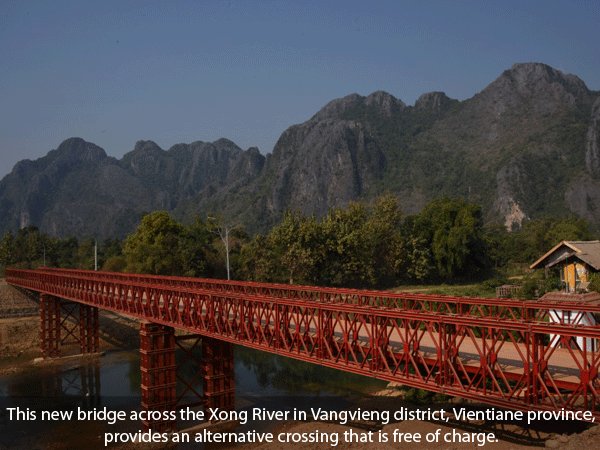 In Vang Vieng there is a new toll free bridge across the Xong river, 5 kms upstream from town.

The old bridge downtown which has been in operation as a concession for many years will continue to operate and collect a toll fee.

From the Vientiane Times 23 January

Vangvieng authorities say they will allow the concessionaire of the Nam Xong Bridge, which is a key river crossing in the popular tourist hotspot, to continue charging people a fee to use the bridge.
The toll was approved as part of the concession agreement and is levied on pedestrians, cyclists, motorbikes and larger vehicles. Motorbike riders are charged 10,000 kip for a two-way crossing.
District officials confirmed last week that the toll would stand after a new bridge opened across the Xong River, which can be used free of charge. However, this bridge is not as centrally located as the existing bridge.

Authorities said the concession-holder of the existing bridge would continue to collect fees from bridge users until the end of the concession period in 2023.
There have been many complaints about the charge levied to cross the bridge, as there was no other option in getting from one side of the river to the other.
In response to these complaints, local authorities decided to build a new bridge.
The new structure has been built about 5km upstream of the existing bridge and requires no toll to use it.
The acting governor of Vangvieng district, Mr Bounchan Malavong, said the much-needed bridge is now open.
Construction of the new bridge began after Prime Minister Thongloun Sisoulith visited the town in August last year.
Mr Thongloun advised the Ministry of Public Works and Transport and the Ministry of Information, Culture and Tourism to build a new bridge, saying this would ease traffic congestion in the peak tourist season.
The bridge runs from Vangvieng market across the river to Phoukham, Ang Luang and Xang caves, which are popular visitor attractions. The bridge cost 7 billion kip and construction was completed in December.
Mr Bounchan said the district was also building a road leading from the bridge to other tourist attractions, at cost of about 6.8 billion kip.
Meanwhile, the government has authorised a Chinese investor to build an expressway linking Vientiane and Vangvieng.
Construction of the 113.5-km road, which began last April, is expected to take three years.
In addition, the under-construction Laos-China railway, which is expected to be finished at the end of 2021, will provide another link to Vangvieng. It will run from Kunming, in southwestern China’s Yunan province, to Vientiane, and will include a stop at Vangvieng.