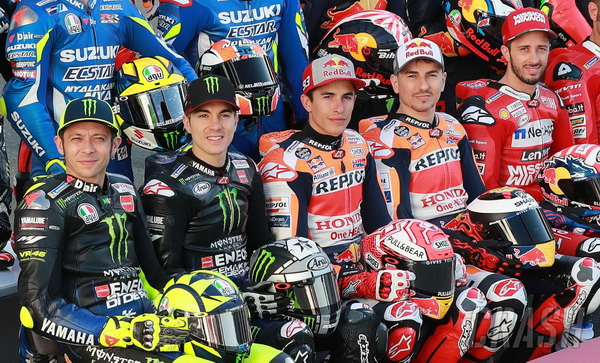 Who is the greatest MotoGP rider of the past decade? Followers of the sport will all have their own answers to this question, based on their own criteria. One way of trying to answer the question objectively is by using numbers to quantify performance. Sure, the numbers may overlook certain factors. But going over the numbers from 180 races held over the space of 10 years helps eliminate outliers, and separate the signal from the noise.

To qualify for consideration, you have to win races. The 180 races held between 2010 and 2019 have seen 13 different winners: Cal Crutchlow, Andrea Dovizioso, Andrea Iannone, Jorge Lorenzo, Marc Márquez, Jack Miller, Dani Pedrosa, Danilo Petrucci, Alex Rins, Valentino Rossi, Ben Spies, Casey Stoner, and Maverick Viñales. Of that group, Iannone, Miller, Petrucci, and Spies have all won only a single race, ruling them out of contention. Alex Rins has won two races, but the Suzuki rider has only been active for three seasons, meaning he made little impact over the full decade.

That left eight riders who have won multiple races this decade: Crutchlow, Dovizioso, Lorenzo, Márquez, Pedrosa, Rossi, Stoner, and Viñales. Of those eight, Andrea Dovizioso is the only rider to have started in all 180 races (he actually started 181 races, but the 2011 race in Sepang was red-flagged after Marco Simoncelli’s tragic death, and would have started in Silverstone last year, had the race not been canceled due to the weather). Two other riders have started every MotoGP race held while they were in the class: Marc Márquez has competed in all 127 races held since 2013, and Maverick Viñales has started all 91 races held since 2015.

Whichever way you run the numbers, one rider stands head and shoulders above the rest. Marc Márquez leads the pack in terms of wins, podium percentage, and poles. On his way to six championships in seven seasons, Márquez racked up a grand total of 56 wins from 127 races, an average of just over 44%. Second in terms of victories is Jorge Lorenzo who amassed 42 wins from 169 starts, a rate of 24.85%.

In percentage terms, however, it is Casey Stoner who is the second most successful rider of the decade. The Australian won 36% of the races he competed in during his three seasons this decade, between 2010 and 2012. But because he only raced for three seasons, he finishes fourth overall in terms of absolute number of wins with 18. But that puts him just 5 wins behind Dani Pedrosa, who amassed 23 victories between 2010 and 2018, and ahead of Andrea Dovizioso and Valentino Rossi who competed for the entire decade.

When you look at podiums, it is Jorge Lorenzo who is most successful. Between his time in the Yamaha and Ducati factory teams, Lorenzo stood on the podium a total of 96 times, compared to Marc Márquez’ 95. Dani Pedrosa has the third most podiums, with 74, just ahead of Valentino Rossi with 70.

That podium score is also reflected in the points haul. In the course of his 127 race starts, Marc Márquez has amassed a total of 2275 points, from a maximum of 3175. That is an average points haul of 17.9, or a little better than the 16 points awarded for third place, and 71.7% of the theoretical maximum, had he won every race.

Márquez is second again in absolute total points to Jorge Lorenzo, who scored 2448 points over the last decade, though in percentage terms, that is just third best, 54.4% to Casey Stoner’s 62.6%. Valentino Rossi has the third highest points haul this decade with 2221, while Andrea Dovizioso is fourth.

It is not just the races which Márquez has dominated. Nobody is able to match Marc Márquez in qualifying, the Repsol Honda rider starting from pole in just under half of the races since he joined the class in 2013. Casey Stoner is second in percentage terms once again, starting from pole 42% of the time, to Márquez 48.8%. In absolute terms, Jorge Lorenzo is second, starting from pole 34 times compared to Márquez’ 62 poles. Dani Pedrosa is the only other rider in real contention, with 18 starts from pole.

These numbers make a solid benchmark against which to measure Fabio Quartararo’s performance. Though the Petronas Yamaha rider did not manage to win a race in 2019, his numbers in his rookie season are very strong indeed. Quartararo’s 5 second places and 2 thirds meant he was on the podium for 36.8% of the 19 MotoGP races he has competed, a better podium rate than either Andrea Dovizioso or Maverick Viñales. His 6 pole positions represent a rate of 31.6%, putting him third overall in percentage terms, behind only Marc Márquez and Casey Stoner. Quartararo scored 10.1 points per race on average, which would put him just behind Viñales and well ahead of Cal Crutchlow in this group.

The numbers also make plain the difference between winning championships and merely being successful. There have been three different MotoGP champions this decade – Jorge Lorenzo in 2010, 2012, and 2015, Casey Stoner in 2011, and Marc Márquez in the other six years – and all three of them have a higher rate of wins than of second or third places. Wins are truly what makes the difference when it comes to winning titles, a fact made clearest by Marc Márquez’ numbers. The Repsol Honda rider wins 44.1% of races, finishes 2nd in 22.8%, and third in 7.9%.

Jorge Lorenzo’s numbers show a similar pattern: 24.9% of wins, 21.3% of second places, 10.7% of thirds. Casey Stoner is something of an anomaly here, having 36% of wins, only 8% of seconds and 26% of thirds. The fact that Stoner’s numbers are from just three seasons may explain the unusual pattern, a smaller sample size of races (50, compared to 127 by Márquez and 169 by Lorenzo) making variation more likely.

The pattern is also repeated in riders who have failed to win a championship. Dani Pedrosa came closest, the Spaniard pushing Jorge Lorenzo for much of the 2012 season, and his relative percentage of podium places is strongest: 15.5% wins, 18.2% seconds, 16.2% thirds. Andrea Dovizioso has finished second to Marc Márquez for the last three years, and his results show a similar pattern, 7.2% wins, 11.7% seconds, 13.3% thirds.

Dovizioso’s results are also a good barometer for the fortunes of Ducati. Compare the Italian’s results in the past three seasons, when the Desmosedici has been far more competitive, and his relative podium rates are very different, 47.3% to 32.2% over the whole decade. His win rate skews closer to the kind of balance show by Lorenzo as well, 21.8% of wins between 2017-2019, 12.7% of seconds, and the same 12.7% of thirds.

The pattern is similar for the other factory Yamaha riders, though Rossi had different teammates during that period. Between 2014 and 2016, Jorge Lorenzo was on the podium 61.1% of the time, and scored an average of 15.3 points per race. After Maverick Viñales joined Yamaha in 2017, his podium rate was 34.6%, and he was averaging 11.5 points per race.

This decade vs last decade

All these numbers leave no room for doubt that Marc Márquez is the rider of the decade between 2010 and 2019. In terms of wins, podiums, poles, points per race, nobody has been able to get close. But how does he compare to the previous decade? In the first decade of this century, it was Valentino Rossi who ruled the roost.

The one place where Márquez outperforms Rossi in their two decades is in pole positions. Márquez has been dominant in qualifying, taking 48.8% of poles, while Rossi’s rate from 2000-2009 was just 24.6%. That is better than Jorge Lorenzo’s pole rate between 2010-2019, but less than Fabio Quartararo’s rate this year.

Is it fair to compare Rossi’s performance from 2000-2009 to Márquez’ from 2013-2019? There are a lot of confounding factors, for sure. Rossi’s first two seasons were spent on two-stroke 500cc machines, after which he spend two years on the Honda RC211V, clearly the best machine of the period. But after that, Rossi switched to Yamaha, taking a bike which had previously been uncompetitive to two more championships in 2004 and 2005, then two more in 2008 and 2009.

It is equally clear that Rossi didn’t face the same level of competition in his first few years in the championship. The riders Rossi had to beat in his early years are much lower on the all-time premier class winners list (PDF) than the competition Márquez faced when he came to MotoGP. Between 2000-2005, when Rossi took 53 of his 77 victories of that decade, he faced Alex Crivillé, 18th on the all-time list, Max Biaggi (20th), Loris Capirossi (23rd), Sete Gibernau (24th), Kenny Roberts Jr (26th).

Contrast this with the level of competition Marc Márquez faced when he came to MotoGP. Márquez had to race against Valentino Rossi, who tops the list of most successful riders in the premier class. But he also had to beat Jorge Lorenzo, who is 5th overall, Dani Pedrosa (8th), and Andrea Dovizioso (19th). Comparisons between eras are hard, and circumstances are different, but the fact that Márquez has faced some of greatest premier class riders of all time speaks to just how good the Spaniard is.

It also demonstrates just how good a decade this has been for MotoGP fans. Between 2010 and 2019, five of the eight most successful riders in premier class history have lined up on the grid. The switch back to 1000cc bikes with spec electronics and Michelin tires has made the racing much closer and more exciting. In 2019, 7 of the 19 races were decided by less than a second. This has truly been a golden age for MotoGP. And Marc Márquez is its current king.