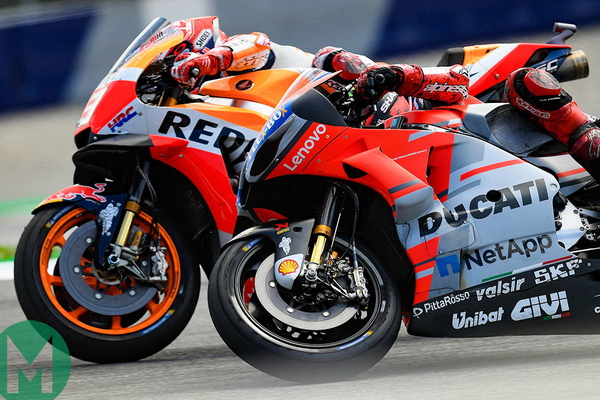 MotoGP – Lorenzo: ‘We will win every race!’

On the eve of his epic Austrian Grand Prix victory Jorge Lorenzo and several other top MotoGP riders were asked to design their ideal racetracks.

Lorenzo was the only one who drew two different layouts: the first for this season, the second for next year when he will ride a Repsol Honda RC213V.

This year’s design was a square: four 90-degree corners. The inference was straightforward – this is the kind of corner preferred by Ducati’s Desmosedici GP18.

The fact that Lorenzo won at the Red Bull Ring, which is dominated by three in-and-out right-handers, suggests that he knows the strong points of his GP18. And perhaps that’s why he (just) failed to win the previous Sunday’s Czech GP at the considerably more serpentine Brno circuit.

After that close-run second place at Brno, Lorenzo revealed that his R&D focus for the remainder of this season is to fix the Desmosedici’s last big problem: lack of corner speed. A few days later I sat down with him in Austria to discuss these matters. I asked him why he is so keen to improve the GP18’s corner speed when any R&D breakthrough will surely bite him on the backside when he switches factories in 2019.

“Because, if we can improve our corner speed so that we have the same corner speed as the Honda, while keeping our acceleration and braking performance, then we will win every race!” he answered. “If we can do all this and I don’t make a mistake, then Ducati will win the championship.”

Wow, that’s ambitious. But consider this: Lorenzo has taken nine points out of Marc Márquez at the last two races and now stands 71 points behind the championship leader with eight races remaining. True, it’s a tall order, because if he is to overtake his fellow Spaniard he will need to better him by eight or nine points per race. That will be very difficult, but certainly not impossible because Michelin throws curve balls at riders every weekend and because Márquez still isn’t averse to risking everything to win a race, as he proved on Sunday when he had his RC213V making all kinds of shapes as he battled to get the better of Lorenzo.

Also, consider that Ducati has now taken as many victories as Honda, including four from the last six, and after the first five races of the season Lorenzo was already 69 points behind Márquez.

But what does Lorenzo actually mean when he says he wants to improve the Ducati’s corner speed? The GP18 has won the last two races, with two different riders on board, so surely the bike is just about perfect.

“We still suffer in the middle of the corner, because the rear tyre always has more grip than the front, so the front is always pushing,” he explains. “To make the corner we need to slow down a lot. We cannot use a lot of corner speed because of the difference in grip between the Michelin front and rear.

“With the Ducati I spent more than one year trying to lean more and more, but the more I leaned the slower I was. I compared my data with [Andrea] Dovizioso and [Danilo] Petrucci and they were faster than me in the middle of the corner with less lean angle. So I didn’t understand – how is this possible? But it’s just like that.

“With the Ducati you need to make the lap time by taking profit of the bike’s stability: enter very soon to the apex, then stay as little time as possible on angle, then take profit of all the acceleration.”

This, of course, is the exact opposite of Lorenzo’s trademark style of sweeping cornering arcs and devastating corner speed. No wonder it took him so long to get the hang of the big Red Duke, with a lot of help from Ducati Corse and a big lump of plastic.

So what does Ducati need to do to magic Honda-beating corner speed out of the Desmosedici? That’s the multi-million-dollar question and if the question wasn’t hideously complex then chief engineer Gigi Dall’Igna would already have found the answer. 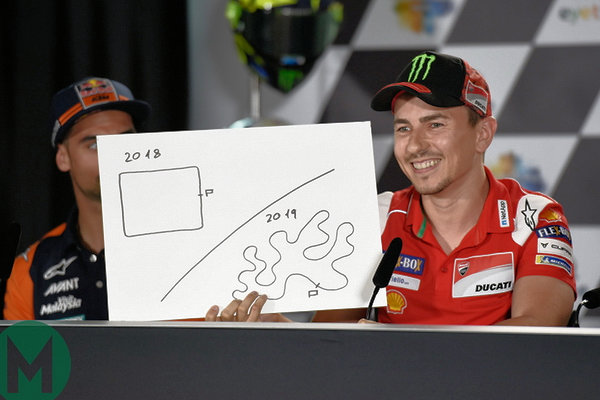 The Ducati’s character comes from a variety of factors: chassis geometry, front/rear balance, frame and swingarm stiffness, dynamic bike position, dynamic centre of mass, power delivery and so on. And if Dall’Igna was to find a way to improve corner speed, he would also lose some braking performance and/or corner-exit speed. It’s all swings and roundabouts.

“Of course there are ways we can be faster with the Ducati,” says long-time Ducati rider Andrea Dovizioso, who stands just one point behind Lorenzo in the championship. “Since the beginning with Ducati it was difficult to use a lot of speed in the middle of corner and it still is – it’s the bike’s characteristic.

Jack Miller is another rider who’s learning to adapt to the Ducati’s peculiarities, although he’s come to the Desmosedici from Honda, not from Yamaha. Ironically, the Australian believes that Lorenzo will have to change his technique all over again when he switches to Honda, because he thinks the Honda uses even more acute cornering lines than the Ducati.

“The Ducati’s cornering line is quite similar to the Honda, but you maybe spend more time at full lean on the Ducati,” he says. “Once you get the Honda turned you want to pick it up as quickly as possible because you have no grip at the rear, whereas with the Ducati you can keep the lean angle for longer.”

Confused? You may be, but will Lorenzo be confused when he climbs aboard an RC213V for the first time in a few months from now?

At the Red Bull Ring the 31-year-old’s ideal circuit layout for 2019 was a squiggle of twists at turns, which he presumably thinks will perfectly suit the RC213V.

Márquez and fellow Honda rider Cal Crutchlow aren’t so sure. “I said to Jorge that in your 2019 track layout the Honda won’t work in some corners,” said Márquez. “If you want to have good turning in long corners you need to choose a Yamaha!”

Crutchlow was even more outspoken. “Jorge is going to have the biggest shock of his life – he’s living in a dream world!” said the Briton, who has won three MotoGP races with Honda over the past three seasons. “I told him he’s going to have to work on his biceps some more. He has the best turning bike on the grid at the moment, so he needs to go and ask Marc and Dani [Pedrosa] how hard our bike is to turn. He is absolutely dreaming – he’ll see next year…”

Both Márquez and Lorenzo are relishing having the same bikes in 2019, especially Márquez, for the moment at least.

“Luckily next year Jorge will not be with Ducati and we will have the same tools, so then no excuses,” said Márquez after finishing 0.130 seconds behind Lorenzo on Sunday. “It will be good. Honda made a good move because they’ve taken a rider who will be able to win with our bike and therefore won’t win with another bike. It will be interesting to see him on a Honda and for sure he will be fast.”

What about this year? “If we are lucky and [somehow] we can recover the points, then maybe we can fight to the end, but it will be very difficult,” says Lorenzo.

Very difficult, but not impossible…