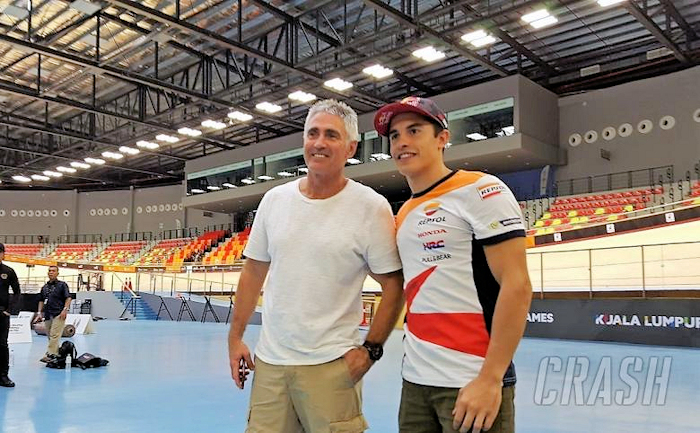 A chat with five-time 500cc world champion Mick Doohan during the Malaysian MotoGP pre-event, held at the national Velodrom on Wednesday…

Q: First of all Mick, what did you think of that race at Phillip Island?

Mick Doohan: It was great, wasn’t it! To be fair, I wasn’t expecting it to be so close. It was certainly a spectacle and great for MotoGP. Especially off the back of the weekend before in Japan. It’s been a great year for MotoGP. Thankfully all of these guys are putting on a good show, but it’s come down to Marc really!

Q: It was an impressive end to the race with Marc pulling out a small lead when he needed to…

Mick Doohan: That’s right. Phillip Island is a place like that. You’ve really got to try and make a break otherwise – as you saw throughout the race – everyone will just tag on.

I think Marc’s a really smart rider. Three world championships and on the cusp of his fourth. So he understood that as well; that if he could break them, he’d got it. Once you’ve made that break, you can leave them to fight amongst themselves.

Whether or not he played the game right until the end to make it look good I’m not sure, but either way you look at it, it was a great race.

Q: Have you been surprised by Andrea Dovizioso this year?

Mick Doohan: To be honest I have. He’s always been a great racer and he’s always been there, but he’s never performed like this. Especially in Japan.

In Phillip Island it seemed like the Ducati had a problem, rather than him as a rider having a problem, so that unfortunately has dropped him out of the championship chase.

But the way he rode in Japan, how can you fault that? With that determination and mental drive; that’s a sign of a real world champion. He could have just sat back and taken second, thinking ‘Marquez has got me beat’.

Marc made a small mistake on the last lap, but Dovi still only pulled back a bike and a half, maybe two. It was still a big dive there at the end of the straight, at the bottom of a downhill turn, in the wet.

So credit where credit is due; that was a hell of a ride. Marc tried to get it back but he just couldn’t pull it up enough when he got beside him, without perhaps taking him out.

The winners out of that were us, really, it was a great show. Going back to Dovi, I think that just shows he’s capable of producing results and races like that. Without a doubt if he can maintain the momentum next year and Ducati continue the progression forward with the bike, he’ll be another real title contender in 2018.

Q: It’s a question that gets asked a lot, is this the greatest era in GP history?

I think whenever there’s great racing, that’s the best time. The good thing about motorcycle racing is that they can pass, the aerodynamics are not so much of an issue.

The good thing at the moment is that there are also a lot of known riders in the pack who can actually challenge for a win. So although it seems to be the same guys winning, there is always a hope that someone else can win.

It’s certainly a good era as far as that aspect goes, but motorcycle racing is always going to produce great races. Occasionally Marc takes off and wins by a country mile, but then you have races like you did last weekend.

I don’t come to many grands prix these days, I was at Phillip Island last week, but the one in Japan generally I’d fall asleep or something! But they’ve been good races so you really want to keep watching them and, ‘wow’, you talk about them afterwards.

As I say, the winner from all this has been MotoGP and Dorna over their four-wheeled competitor!

Q: You obviously overcame some big injuries, what have you made of Valentino coming back from his broken leg?

Mick Doohan: Look, that’s nothing short of sheer determination and talent from Valentino. He could have just sat back, put his feet up and come back in his own time. But to have that sort of injury and then still want to get back, to still believe that he’s got a chance of the championship, I think that shows the determination and commitment to the sport that he has.

He is not just there to make up the numbers; he’s there to win. He’s there to win the championship and he loves it. A few years ago you perhaps thought Valentino should almost retire. But at the moment you forget about his age.

He’s still the biggest name in the sport – Marquez is a close second – plus he’s committed. He’s as good now as he was when he was winning his championships. Unfortunately, things haven’t rolled his way the past few years, but he’s been close.

He’s had a few challenges with Lorenzo and now Vinales [as team-mates] but he’s showing, ‘you’re not going to come in here and kick me around, you’re going to have to fight for this’.

And that just shows the determination, commitment to the sport and how much he loves it. I think for somebody to have had a winning career of 17 years and to be in the sport for 20-odd years – in any sport, be it golf or tennis or whatever, there’s not many guys that could last that long.

Most guys would get burnt out, the desire to actually compete dwindles and they lose the will to win – especially the amount he’s won, it’s not like Valentino is chasing his first win!

Q: Do you think things can roll his way for title number ten in future?

Mick Doohan: Without a doubt, it depends on how long he wants to compete. This year again he was up around the front and challenging until he had the injury. Last year he was challenging as well, so he’s in amongst it and just needs the cards to fall his way.

This year really could have been anybody’s. They all had a crash pretty much, there’s been a whole bunch of things that kept everyone together. There’s a little bit of luck required this year – consistency is key, clearly you’ve got to be consistently out front.

But there’s been so many other variables it’s also made the championship exciting, because suddenly something happens and you think they are out of it and the next minute they are back in the game.

Q: What do you make of the modern bikes?

Mick Doohan: The lean angles and the side grip are great and some bikes handle staying on their side longer than others. But that’s the main thing.

And with that I think it becomes a bit easier to lowside. Because even not so long ago it was about getting in to the corner, getting the bike down, the lean angles were quite low, but then you’d pick the thing straight back up and get it out of there. Now you stay on your side, it’s a bit like a Moto3 bike.

So I think that has changed the dynamics a little bit; there are not so many big highsides but there are a number of lowsides. Equally, as things like tyres evolve you have to adapt. Even for the ten years I competed, things were always changing and these guys will keep adapting to whatever they have to do.

But the bikes sound great and look great.