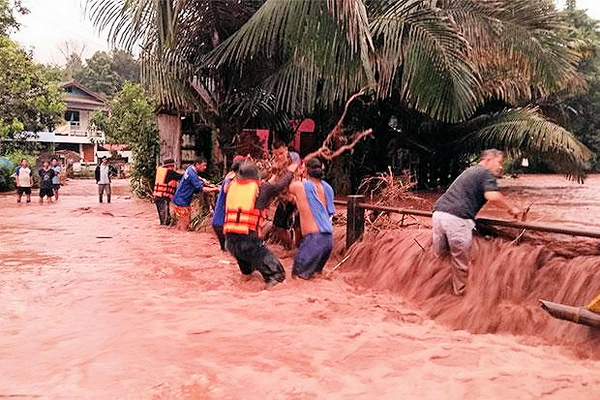 NAN: Mountain runoff triggered mudslides that uprooted trees, blocked roads and damaged houses overnight in two districts of this northern province.
In Chalerm Prakiat district, hours of heavy rain led to a mudslide at Pang Hok village in tambon Huai Kon in the early hours of Tuesday. Electricity wires were brought down, causing a blackout throughout the village.
Several houses, chicken farms and fish ponds were damaged by the mudslide, which also blocked the main road leading to the village. It was impassable to all vehicles.
Chainarong Nantasai, chief of Chalerm Prakiat district, led military rangers and local officials on an inspection of the devastation at Pang Hok on Tuesday morning. State assistance was given to the affected households. Fortunately, there were no deaths or injuries.
The district chief ordered the evacuation of 39 people whose houses were in at-risk locations. The families moved to stay with their relatives.
In Thung Chang district, mountain runoff flooded many houses at Nam Sod Moo 8 and Nam Sod Tai Moo 12 in tambon Lae. A mudslide hit Huai Sateng village in tambon Ngob and blocked a local road.
Col Rattana Pattanasophon, commander of the 32nd military ranger task force, on Tuesday sent rangers to assist local mitigation and disaster prevention crews working in the three affected villages.
Nan governor Paisarn Wimolrat on Tuesday ordered local agencies to closely monitor water levels in the Nan River and and its tributaries. Local officials were put on full alert for further emergencies.