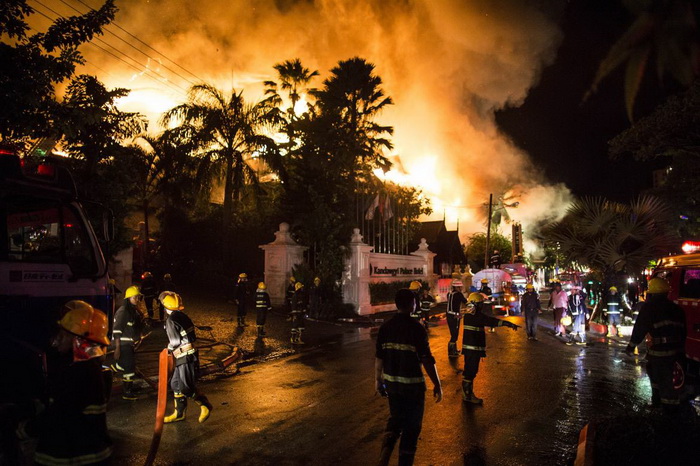 YANGON — At least one person has been killed and two injured in a massive fire at one of Yangon’s most iconic hotels. The fire broke out around 3:15am and quickly engulfed the Kandawgyi Palace Hotel, lighting up the city’s skyline.

A male guest from Japan was confirmed dead at the scene, while a 24-year-old woman from Macao is in a critical condition at Yangon General Hospital. She is believed to have been injured when she jumped from the hotel’s upper floors.

The Fire Services Department was called at 3:30am and despatched 80 trucks to the hotel. Firefighters battled for 3.5 hours to bring the inferno under control, with one firefighter treated for smoke inhalation.

U Htay Lwin, a spokesperson for Htoo Group, said at a midday press conference that 96 rooms were occupied with 141 guests, the majority foreign tourists. The source of the fire was still under investigation, he said.

He also said the company would take responsibility for guests’ losses due to the fire. The hotel was insured, he said, but did not provide further details.

Attention is likely to focus on whether safety and warning systems at the hotel were adequate and working.

An American tourist who narrowly escaped the blaze told Frontier she heard no fire alarm and was woken in her room by hotel staff.

Ms Adrienne Frilot from California said she heard knocking at her door for 15 to 20 minutes but initially thought it was just a drunken guest.

“We realised that something was wrong and opened the door and we smelled the smoke and then evacuated immediately,” she told Frontier.

“There was no alarm and it just sort of sounded like there were drunken people in the hallways.

“The staff were so helpful, as soon as I stepped out of my room with my bag, someone grabbed my bag and said, ‘Turn this way,’ and we went out one by one.”

A Swedish guest related a similar experience, saying he did not hear an alarm or see evidence of a fire sprinkler system. He too was woken by staff and evacuated from the building.

However, Mr Raymond Bragg, the chief executive officer of Htoo Hospitality, said at the press conference he was at the hotel when the fire broke out and the fire alarm was activated.

Htay Lwin added that staff knocked on the doors of guestrooms as a precaution, not because the hotel fire alarm had failed. “The fire alarm was working normally,” he said.

Owned by U Tay Za’s Htoo Group, the Kandawgyi Palace Hotel was built in the early 1990s on the banks of Kandawgyi Lake in central Yangon. However, parts of the hotel date to 1934, when the site was used as a rowing club.

Developed by the Bangkok-based Baiyoke Group of Hotels, Tay Za bought the hotel in 2010 for a reported US$29 million. It has since been refurbished and expanded, and is considered one of the city’s best hotels.

Kandawgyi has existed from time immemorial. In the early days of the British colonial Regime, about the year 1877, Kandawgyi was a source of water supply to the eastern quarters (Pazundaung and Botathaung) of the city of Yangon. It is approximately 5 miles (8 km) in circumference, and has a depth of 20 to 45 inches (50 to 115 cm). The area of the Garden is 110 acres, water areas is 150 acres, which makes it a total of 260 acres. You can find a variety of beautiful flowers, the natural scene of the lake water and large shady trees. There are also an orchid garden, the children play-ground, Mini Zoo, the souvenir shops and many restaurants. The playgrounds and picnic areas are favourite spots for children and teenagers.

The design was develop and constructed by a British Army engineer (Lt. Alexander Fraser), incorporating two artificial lakes (then called Royal Lake and Lake Victoria) created in 1882-3 to provide clean water supply . In 1901, however, water in the lake was found unsuitable for drinking purpose. Kandawgyi was formerly called the “Royal Lake” during the British Colonial Rule. In those days, Kandawgyi was the city suburb with no houses in the surrounding area expect the Yangon Zoological Garden.

During the Second World War, Kandawgyi and its environs were very busy with city dewellers who took refuge at every monastery, nunnery and zayat (rest house) in the vicinity of the great Shwe Dagon Pagoda to avoid the allied bombings in the downtown Yangon. The Kandawgyi Palace isn’t just a hotel but a Myanmar Institution that has been part of the fabric of Yangon through the many eras of this changing country. The location even before the original building was built is one of Burma legend, said to be the place their famous Mon Queen Shin Saw Bu took her last breath whilst looking over to the sacred pagoda. Later on the oldest parts of the building were built during the era of British Burma and became the exclusive “Boat Club” in 1934.

Boat Club
Regattas are held in December, and sometimes during the monsoons, and on these occasions the club is at home to the whole of the European community in Rangoon. A few years ago a team of Ceylon oarsmen held an inter-regatta with the Rangoon rowing men, in which the latter gained a decisive victory. The majority of the rowing members of the Rangoon Boat Club have learned their rowing at one or other of the public schools or at the university, but there are a fair number of members who have joined the club as novices and have received the whole of their instructions in rowing in Rangoon. In addition to pleasure craft the club has a number of clinker-built pairs and fours, whilst for the sculling members there are a number of light racing boats, variously known as a canvas boats a and a shells,” as well as numerous clinker-built a whiffs. On numerous occasions the boat club has had the pleasure of entertaining distinguished guests. When the Prince and Princess of Wales visited Rangoon they were entertained by the president and members of the club, and the two large framed photographs of their Royal Highnesses, which occupy a conspicuous position in the pavilion, testify to the manner in which they appreciated the reception which was extended to them. When the Viceroy last paid a visit to the town he also was entertained by the club.

The Kandawgyi Palace Hotel began life in the 1930s as the site of the Rangoon Rowing Club, a popular haunt with British officers and elite expatriates. 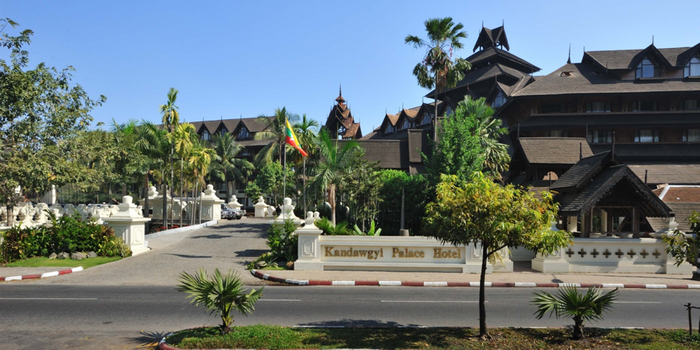 During World War II, the two-story, red-brick building was used by the Japanese as a welfare department. A few years later, in 1948, the property became the National Biological Museum. A life-sized replica of a tyrannosaurus in the hotel’s tropical gardens pays tributes to that period. In 1979, the Ministry of Hotels & Tourism took over the site and converted it into a hotel, featuring 10 teak bungalows, which in 1993 were replaced by a larger lakeside building. The building that stands today was designed in the spirit of golden-teak Thai architecture, as operators Baiyoke Group of Hotels hail from Bangkok. Later on, Kandawgyi Palace Hotel has been operated by Htoo Group of Companies until now.