Visa on arrival is available entering Laos, but NOT Vietnam.

Vietnam is now possible but you must have your permits approved in advance.
Mark & Nikki rode into Vietnam on their Harley in 2009.
David Unkovich + 3 friends rode into Vietnam in March 2010.
Vietnam is also possible if you are riding a Vietnamese registered bike back in.

Note that simply rocking up to the border & trying to sweet talk your way in does not work.
Look here The Wheezy Rider & Thao flew their Honda Goldwing 1800cc into Hanoi in July 2009 & 2 weeks later the bike was on another plane back to Bangkok. The bike stayed at the airport & went nowhere.
Hiko & 6 Finnish riders riding small Yamaha Nuovos tried numerous Cambodian / Laos – Vietnam border crossings in 2007 & was refused Vietnam entry at all the ports they tried. 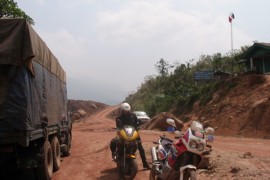 Vietnam Warning since late April 2002, motorbikes have been refused entry into the country. If you got in before then, you are lucky. Frank Butler, alias Mr Beem snuck in via Cambodia via Phom Den (C) / Chau Doc (V) in early 2004, but this I feel was a one-off trip & with officials who were not totally familiar with the rules, & definitely has not been repeated since. but you must have your permits approved in advance.
If you do get in be sure of your paperwork, as there still can be problems: Africa Twin rider, Chan KP from Singapore had a nasty little experience in July 2000, after entering Vietnam at Nam Phao (L) / Cau Treo (V). On his way out at Lao Bao the Vietnamese customs refused to let him leave the country as he had no inward Customs Baggage Declaration form (from Cau Treo). Caught in a difficult situation, he was held at the border for 6 days, during which time his visa also expired. He was only able to “escape” after the Singapore embassy in Hanoi intervened on his behalf. So be warned both entering and leaving Vietnam can be tricky. To see what the required nasty little Baggage Form looks like click here. 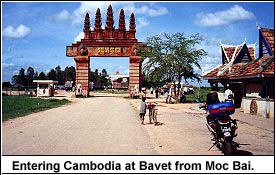 In Jan 2002, Chan sent in another report: “We entered Laos through Nakhon Phanom / Tha Khek & Vietnam through Nam Phao / Cau Treo. Route 8 had improved somewhat as compared to my last visit, all tarmac with some isolated potholes. As usual, the road is strewn with fallen rocks & boulders from the cliff sides. The Lao customs at Tha Khek physically checked our bike’s chassis & engine numbers against our registration cards but never issued us any customs form.

We had no problem exiting Laos at Nam Phao but the Cau Treo(VN) customs wanted to have the Laos customs form for the bikes as proof that our bikes had entered & left Laos legally. After 5 hrs of waiting & talking to several officers on both sides of the border, the shift leader of the Cau Treo Customs arrived for work & made things work for us. All we need to do is fill up our bike’s particulars on the temporary import declaration column of the Immigration Form, simple as that. That’s exactly what I did the last time I entered Vietnam at the same border but still I’d problem getting out of Vietnam at Lao Bao. So I was still rather apprehensive if this will allow us to exit Vietnam without any problem. We just hoped that the Customs at Moc Bai will be more forthcoming when we exit Vietnam to enter Cambodia. 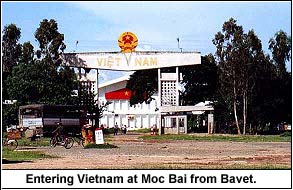 We spent 8 days in Vietnam, going South from Ha Tinh to Ho Chi Minh city. The customs procedure at Moc Bai turns out to be smooth & straight forward, just that we need to fill out another immigration form with the bike’s particulars, that’s all. Unexpectedly, the Bavet Customs wanted us to have official document, such as the Carnet, as guarantee that we’ll not sell the bikes in Cambodia illegally. We talked all the way up till the Chief of Customs & Excise of the Svay Rieng Province 44km from the border. It was a weekend but I managed to contact the 2nd secretary of the S’pore Embassy at Phnom Penh to fax us a letter of assistance for the Customs Chief. This done the trick but still we need to spend one night at Svay Rieng as we’d wasted 7 hrs & the ferry across the Mekong towards Phnom Penh has stopped operation for the day.”