You need a visa in advance in your passport = get it from a Lao embassy beforehand!

1. Friendship Bridge: can sometimes be problematic.

Entering Laos at the Friendship Bridge

There are four Friendship Bridges:

The bridges are all open 7 days a week. Exiting Laos at Savannakhet across the bridge. 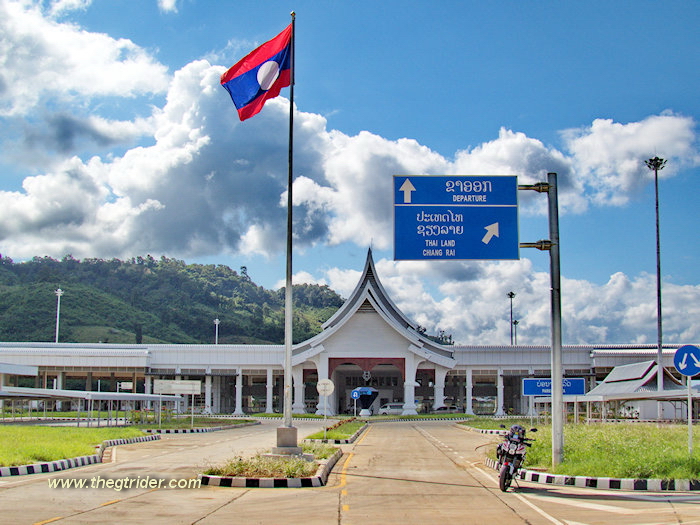 The entrance to Pakxan immigration.

After Bun Kan / Pakxan the next one down is a land border crossing at Chong Mek (Ubon Rachathani ) / Vang Tao (Pakxe L). Upstream from Vientiane you can also use Tha Li -Nakraseng (T) / Nam Heuang – Kenthao (L.) if it is open. 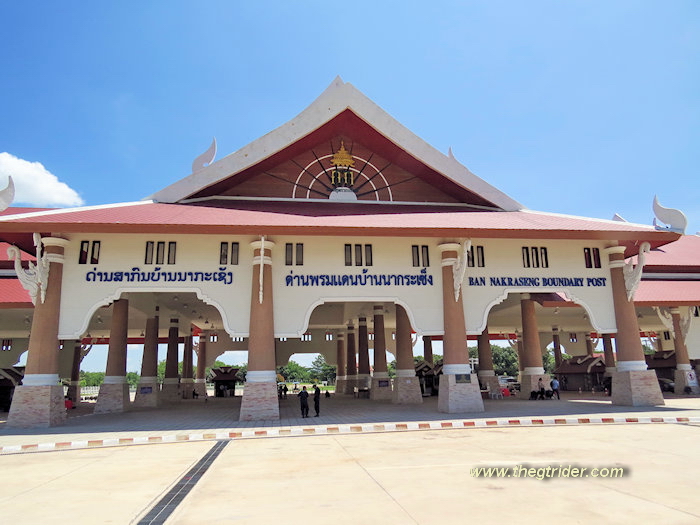 Note Friendship Bridge at Nong Khai:  gets extremely busy on weekends & public holidays with hundreds of vehicles crossing; & if possible it is better to avoid crossing at these times. If not it can sometimes take 2 hrs plus to cross, such are the queues for customs & immigration – on both sides, Thailand & Laos. Good luck & enjoy the wait with your riding kit on – it gets hot!

With the Friendship Bridges across the Mekong the problem appears to be the cross-border agreements managing the bridges, where the authorities don’t want to encourage hundreds of local riders on their scooters from going backwards & forwards every day. Once you understand this it is not so bad, but whatever, please don’t abuse the bridge authorities as they are only following the policy set by their government bosses. 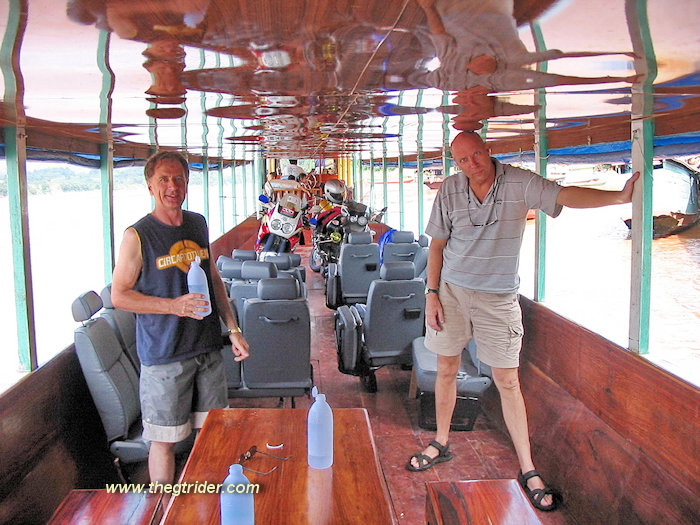 Ready for a Mekong boat trip with the bikes on board.

2. FB2 Friendship Bridge 2 at Mukdahan / Savannakhet to cross this bridge from Thailand you need written approval from the governor of Mukdahan province to exit Thailand across the bridge = you need a tour company permit.  Exiting across the bridge from Savannakhet is not straight forward, where the Lao prefer you to hire a pick up to carry your bike across. However GTR has ridden across this bridge 3 times from Savannakhet after some lengthy discussions.

3. The Mekong Boat Trip: The Mekong Boat Trip to Huay Sai – Pak Beng, the Mekong river in this section is arguably the most beautiful of the ‘Khong between Jinhong in China & Ho Chi Minh in Vietnam. It can be a perfect start / finish to any motorcycle trip in Northern Laos. Highly recommended, hire a boat & do the ‘Khong, you won’t regret it. Getting your bike on & off the boat is enormous fun too. See this 2nd Mekong Boat trip report. 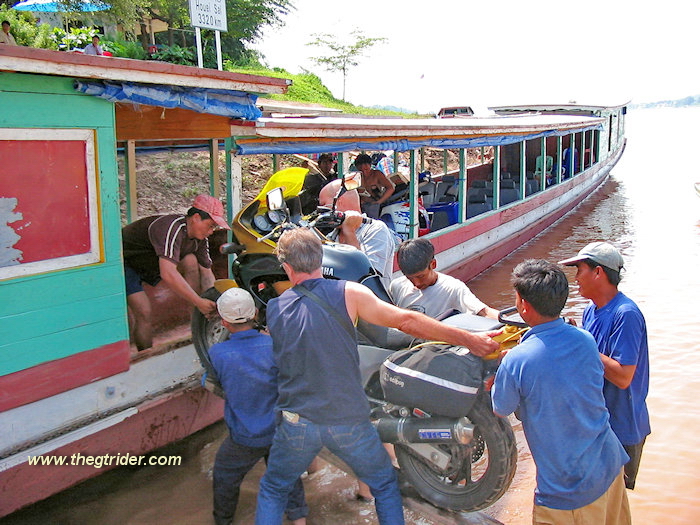 Loading bikes onto a boat for a Mekong boat trip.

4. Muang Ngern (Hongsa), Laos / Huay Kon (T):  This land border crossing has been problematic entering Laos for years, with numerous hiccups along the way & the border being temporarily closed to bikes on several occasions. Currently (September 2016) it is closed to all motorbikes & bicycles. Exiting is ok. The border crossing was originally opened purely to facilitate construction of the Hongsa power plant, then the rules were relaxed, visa on arrival was available & bikes were let in. However frequent incidents occurred with groups of Thai bikers, such that the Muang Ngern officials got upset, & every now & again closed the border to bikes. The current 2016 closure seems more serious this time round. So your next options are Chiang Khong / Houi Xai or the 1st Friendship Bridge at Nong Khai / Vientiane. 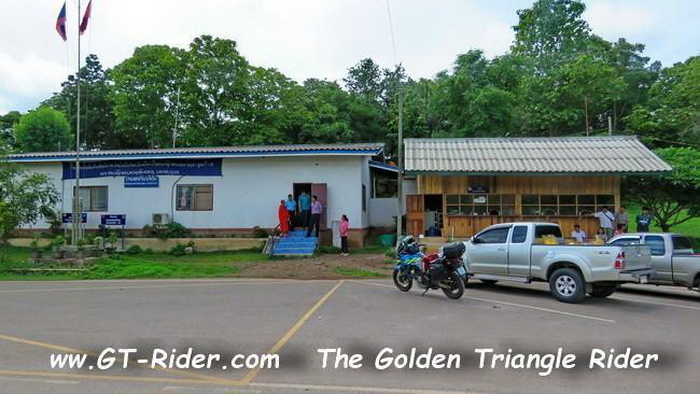 5. Phou Doo / Dou: There is a new international land border crossing at goes from Uttaradit in Thailand / Pak Lay (Xayaboury) in Laos. However there is no visa on arrival entering Laos & you must have obtained a visa from a Lao embassy or consulate beforehand. Exiting from Laos is ok.  Read about a failed GTR entry into Laos via Phou Doo in 2015. BUT Closed to motorbikes – entry & departure – in September 2016. 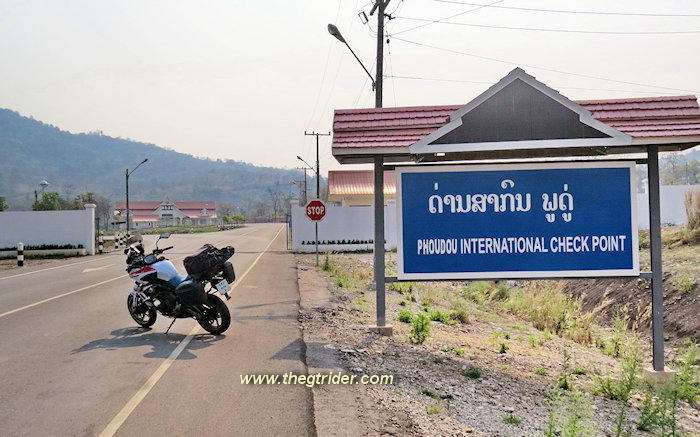 6. Nam Hueang – Kenthao (L) / Nakraseng – Tha Li (T). Entering Laos at the new Nam Hueang / Kenthao crossing is a relatively new crossing. This is the most difficult crossing in Laos. In 2020 exit is not permitted, even if you have Kenthao as your designated port of departure on your entry permit! See this GT Rider forum report for more info & photos on this crossing. BUT Closed to motorbikes – entry & departure – in September 2016. 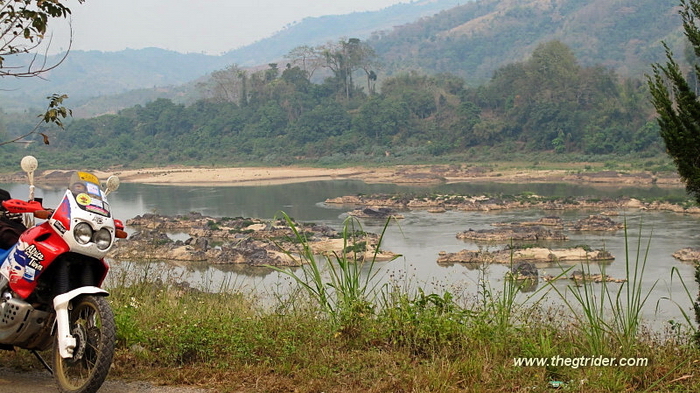 Riding the Mekong between Thailand & Laos in the dry season.

7. Pakxan (L) / Bun Kan (T). Downstream from Vientiane & Nong Khai. Use this crossing to enter Laos & go to Vientiane when you can’t enter Laos via the Friendship Bridge. Note that there is no visa on arrival for Laos at Pakxan, so you must have a visa in your passport first. Get one from the Lao consulate in Khon Kaen. 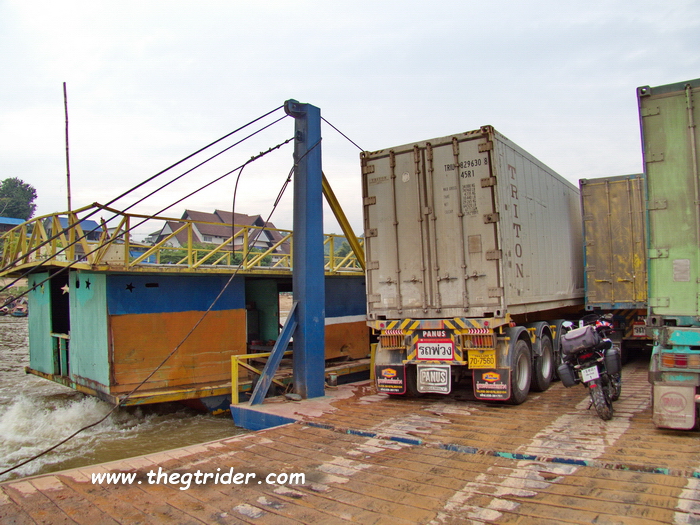 9. Note Laos Entry: You are normally granted 1-2 weeks bike entry permit. A maximum of 1 month is possible on arrival but not automatically given, however you should ask. The overstay fine is 200 baht a day, but this is not always collected when you leave. 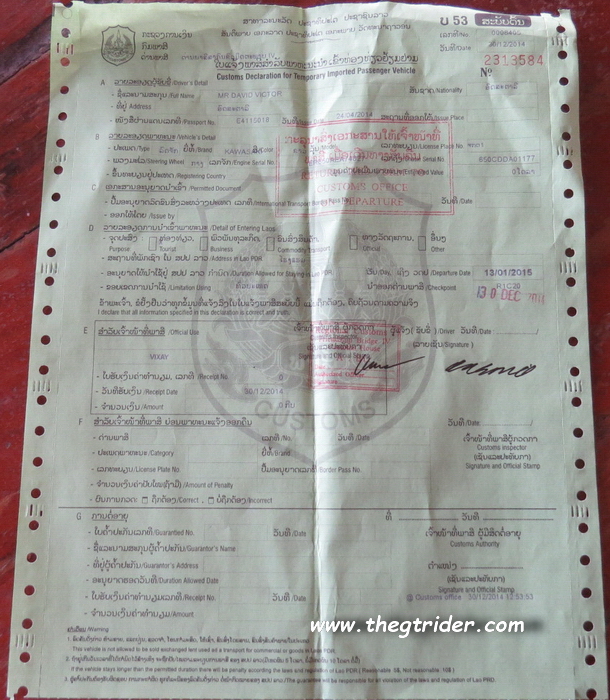 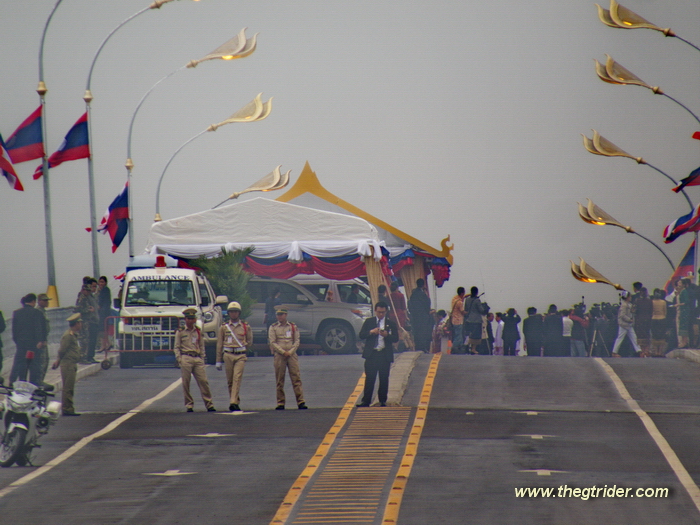 The official opening of the 4th Friendship Bridge at Houei Xai – Chiang Khong 11.12.13.

If you don’t like any of this then use the Huay Kon (T)  – Muang Ngeun (L) border crossing (if it is open).

Go here for info on the opening of the 4th Friendship Bridge, plus a report on the first crossing by GT Rider. 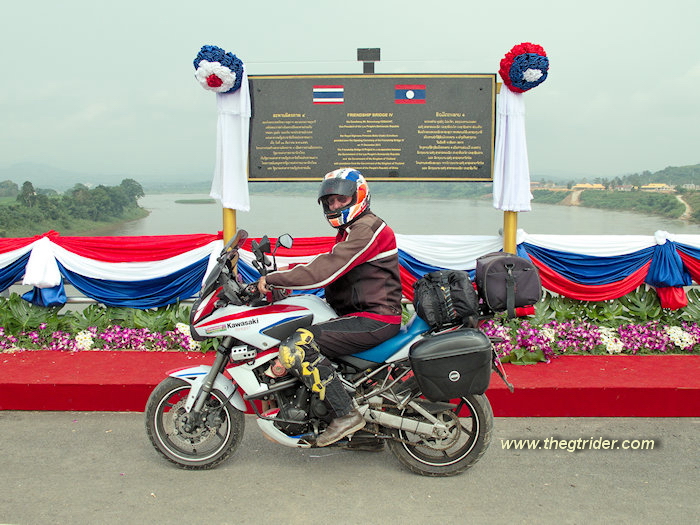 GTR first bike across the 4th Friendship Bridge in 2013.

11. Insurance is compulsory when entering Laos so make sure you get insurance from AGL Insurance. Skip out on the insurance & you could end up on the run & / or be in jail for awhile as Asian Motorcycle Adventures found out. 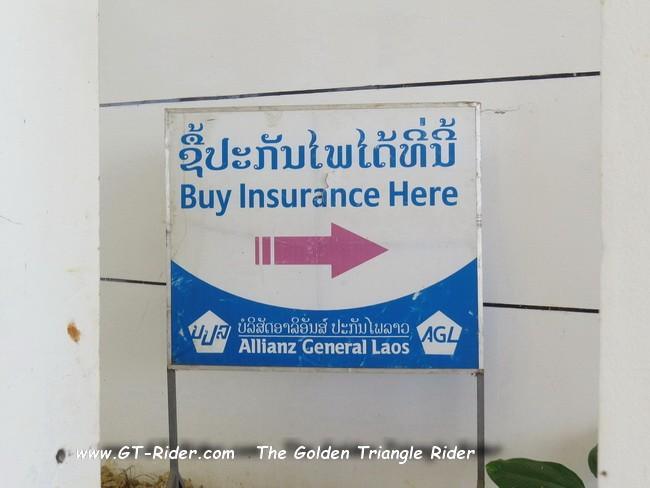 AGL is the recommended insurance company to use in Laos.

Note: Departing Laos for Cambodia at Veung Kham is often problematic & the Cambodian Officials usually refuse motorcycle entry at that spot.  Other crossings into Cambodia are also tricky at times. See the GTR Cambodia forum for more information.