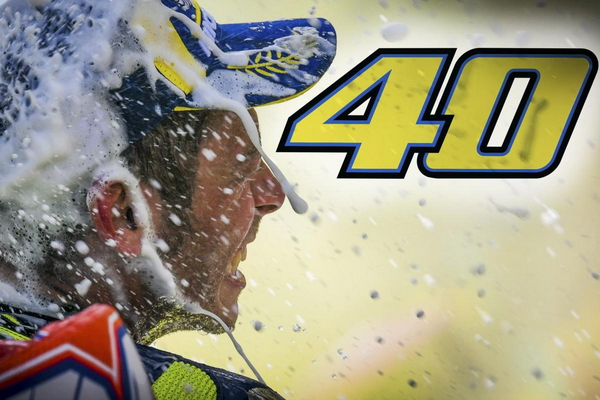 Recounting memories of Valentino Rossi, who turns 40 on Saturday

Valentino Rossi celebrates his 40th birthday on Saturday, hoping against hope to become the first forty-something to win a world title since the 1950s, when grand prix racing was ruled by older riders who’d had their careers interrupted by the Second World War.

To give you some idea of Rossi’s advancing years, Britain had its first £1million footballer in February 1979, when Trevor Francis signed to Nottingham Forest. When he won his first grand prix in August 1996 the Spice Girls were number one.

The big four-oh isn’t the only major life landmark that Rossi reaches this year, because three weeks later, on 10th March, he commences his 24th world championship season. Only two riders have got close to that, Aussie great Jack Findlay, who raced 20 and a bit seasons from 1958 to 1978 and Brazilian Alex Barros, who raced 22 seasons from 1986 to 2007, having lied about his age to get his first grand prix licence to race in the 80cc class.

What can be said about Rossi that hasn’t already been said? Nothing, really. Rossi may not have won a race for the last year and a half, but he’s still the most successful premier-class racer of all time and has contested a total of 383 grands prix, which is not that far off half of the 876 GP events staged since the very first world-championship race June 1949! That is an astonishing statistic. 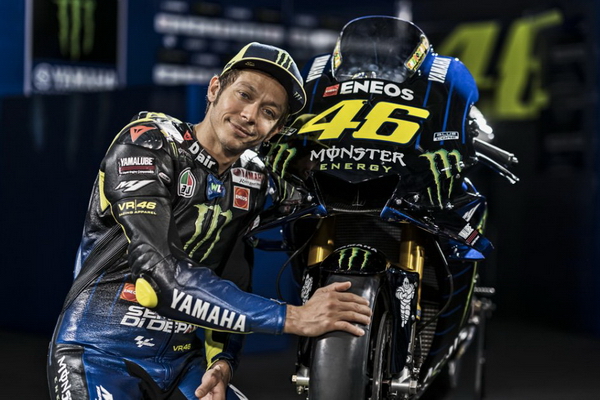 I’ve already written enough Rossi plaudits over the past two-and-a-bit decades (although not so many recently) to fill a book or two, so I’ll try and spare you anymore. Instead, here are a few memories.

The first time I saw Rossi ride was in May 1990 at a go-kart track in Rimini. The last time was last week at Sepang. That’s almost three decades of watching someone going around in circles, making a tidy living out of him along the way. Thanks!

The 1990 Italian Grand Prix was staged at Misano. I took advantage of that trip to check out a new craze that was sweeping the nation and – although I didn’t know it at the time – would create a whole new generation of Italian GP riders. Minimoto was huge on the Adriatic seaside coast, in Misano, Rimini and Cattolica. Gangs of kids would descend on go-kart tracks, rent minimotos and race around until they collapsed in agony or in a fit of giggles.

Most of those kids were just there for a laugh, but not all of them. Most of the minimoto venues continued running late into the night, underneath the floodlights, which is when most of the carnage ensued. That’s when I spotted one of my childhood racing heroes.

Graziano Rossi, ponytail and all, was stood by the track watching a little kid whizz around in circles. I’d never met Graziano before, but I wanted to say a quick hello and tell him how much I had enjoyed watching him race. Then I asked him why he was there. “Eeez my son,” he said, pointing at the little kid on the little bike in the shadows. Nice, I said, and off I went, thinking nothing more of it.

The next time saw Rossi ride was in 1995, when he contested the 125cc European Championship, which ran concurrently with several GP events. But I’d be lying if I said I’d noticed him. At that time I was too busy running after Mick Doohan, Daryl Beattie, Luca Cadalora and Alex Crivillé to worry about kids doing Euro 125 races.

It was the two years later that it finally dawned on me: something big was happening.

In May 1997 Rossi had his fourth grand prix victory, at Mugello, and he stopped halfway around the slowdown lap to collect a blow-up doll from his fan club. The doll had been labelled Claudia Schiffer in felt-tip pen, a huge dig at his bitterest rival Max Biaggi, who had been telling anyone who would listen that he was dating supermodel Naomi Campbell. Back then, Rossi and Biaggi were like the Montagues and Capulets. 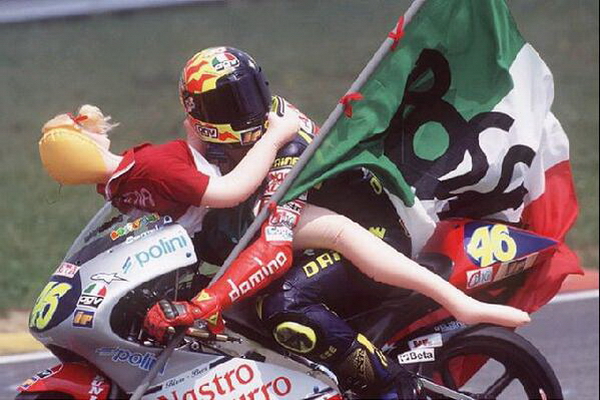 Like most of his post-race theatrics, there was nothing spontaneous about the blow-up doll gag. Rossi had planned this taunt, so Claudia had been sat in her box for several months, awaiting the moment.

Two months later we arrived at Imola, for the next Italian race. By now the whole of Italy had got the joke. The nation had fallen in love, from wee bambinos to old grannies. I’d never see a crowd like it. And all for a 125 rider! 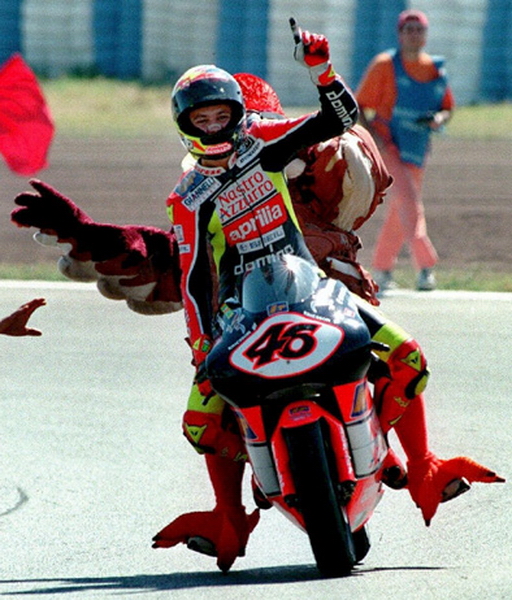 B107-19980920-BARCELONA, SPAIN: Italian motorcyclist Valentino Rossi rides the honor lap accompanied by a fan on the pillion seat who wears the costume of a cock, after winning the 250cc race of Catalan Grand Prix, Sunday 20 September at the Montmelo circuit in Barcelona. EPA PHOTO/EFE/LLUIS GENE/GB-cl

As a journalist, you chase the big stories, so I chased the big story. I had my first proper chat with Rossi during preseason testing at Jerez the following spring. I thought it would be fun – and, erm, lucrative – to ghost-write his column, which I’d syndicate to magazines in Britain, Europe Australia and the USA. I quietly explained my idea and he said, yeah. ‘How much will you want?’ I asked.

‘Nothing’, he said, ‘just bring me a CD of some British music.’

So I spent 1998 and 1999 chasing him around the paddock on Sunday evenings, trying to find out what he’d been up to. The chat was always funny and interesting; usually with the mysterious Gibo Badioli hovering in the background. Rossi was living a wild life back then; lots of late nights, lots of fun and lots of winning. I made sure I always gave him some esoteric CD: Goldie, Roni Size, LTJ Bukem…

But getting to him, let alone getting to speak to him, was becoming tiresome. This process usually involved fighting my way through a small army of swooning female admirers to get to his camper. Rossi mania was shifting into top gear. By the time he moved up to 500s in 2000 he was way too popular and I really didn’t want to waste my Sunday evenings – when I had a ton of other work to do – chasing him and hassling him.

But I wasn’t quite done with chasing him and hassling him. During the winter of 2001/2002 I wrote his biography. This was when he had started ‘living’ in London and was having even more fun, losing himself in the capital’s buzzing underground club scene. I interviewed him several times in his dingey serviced apartment in St James Square, usually with Uccio Salucci snoring on the sofa, after another big night out.

That same winter I visited Graziano and Valentino Rossi’s mum Stefania in Italy. I asked dad what he had been able to teach his son when he was starting out on minimotos, and 125 production bikes.

“I never had the chance to teach him anything because I quickly understood that he didn’t want to hear my suggestions,” said Papa Rossi. “Later on it got worse – if I suggested something he’d do the opposite! In general parents can’t teach their kids anything through words, it’s from the way that they behave that kids pick up things.”

That’s the best piece of parenting advice I’ve ever had.

In the decade and half since then Rossi has been transformed from superstar motorcycle racer into a global icon and a global brand (which annually turns over more than 30 million Euros in merchandise and branding deals with Oakley, Monster and other companies keen to add some Rossi-glitz to their products).

Rossi doesn’t really do one-to-one interviews any more. Why would he – after a decade of spending several hours every weekend answering the same 20 questions from ten different journalists?

Therefore most of us get what we need from him during his daily media debriefs. Win or lose, these are always packed, because he’s still the biggest show in town. (I recently made a rough – and lazy – calculation of his popularity: he has five million Twitter followers while the rest of the MotoGP grid has seven million.)

I can recall only one Rossi debrief which attracted so few journalists that it seemed like no one cared anymore, like the years of Rossi mania were finally over. It was June 2012 at Silverstone. He had finished ninth on his Ducati GP12, 36 seconds behind winner Jorge Lorenzo. The only journalists who bothered turning up to ask him what had gone wrong (again) were Matt Birt (MCN journalist, now Dorna’s lead commentator) and me.

He looked at us, grinned and said, “this is the right number of journalists for the result”. Even then, his humour and philosophy shone through.

There has never been a more popular motorcycle racer and there may never be. But is Rossi the G.O.A.T., the greatest bike racer ever? That’s an impossible question to answer, for all kinds of reasons.

Many millions worship Rossi; although since he passed his peak and has been involved in a few controversies, many don’t. They say he’s no longer the funny, cheeky chappie he used to be.

But was he ever? He is a motorcycle racer, which although you may not know it, means he’s a petrolhead heavyweight boxer. Bike racing at the highest level is a nasty, vicious business, on an off the track. You don’t get where Rossi’s got without being highly intelligent, hugely talented and absolutely ruthless. Many racers smile and wave at the camera, but that’s just the smiling/waving part of their brain doing its thing; the rest is thinking many thousands of other things, about every aspect of the bike, the tyres, the rivals, the track and at which part of the track he’s going stuff which rival.

When I was a teenager my favourite riders were Graziano Rossi, Tom Herron and Pat Hennen. Everyone else was riding high on the Barry Sheene bandwagon, but I’m a contrary f**k so I preferred to trudge alongside, quietly appreciating the riding skills and personalities of the Italian, Irishman and American. I never met any of them at that time. Never wanted to. I just wanted to get high on the atmosphere of watching all these crazy people doing some fast and beautiful riding on the other limits of their lives.

I’ve never got the whole celebrity worship thing. I feel that many of today’s racing fans know more about the riders and their girlfriends and their supercars and their glittery watches than they do about what these extraordinary motorcyclists do on the track and in the garage.

IF ROSSI DOES WIN ANOTHER GP, HE STILL WON’T BE THE OLDEST…
Most of the oldest riders to score grand prix victories had their careers interrupted by the Second World War, so you can imagine the enthusiasm with which they returned to the track in the late 1940s.

Anderson spent the war dodging Nazi U-Boats in the merchant navy, Graham flew Lancaster bombers (and was awarded the Distinguished Flying Cross) and Daniell tried to join the army but the three-time TT winner was refused due to his poor eyesight!

Instead he served in the Home Guard.

Interestingly, Anderson featured in Hitler’s so-called Black Book, a list of prominent Britons to be arrested or eliminated following the Nazi’s planned invasion of Britain. Other names included Noel Coward, Sigmund Freud, Aldous Huxley, HG Wells and, of course, Winston Churchill. Anderson’s inclusion in the list may have something to do with the fact that he worked as a journalist in Hamburg during the 1930s.