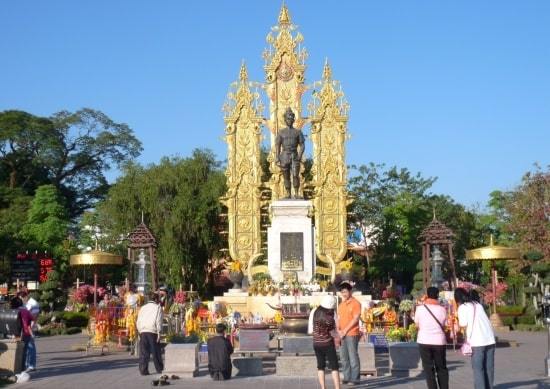 Por Khun Mengrai (The father) was born in Ngoen Yang (present day Chiang Saen) as the son of the local ruler Lao Meng and his wife Ua Ming Chommueang, a princess from the Tai Lue city of Chiang Rung, now in Yunnan, China. In 1261 Mengrai succeeded his father to become the first independent king of unified Tai city states in northern Lanna and northern Laos. The kingdom quickly expanded towards the south by both alliances and through the conquest of neighbours.

In 1262 he founded the city of Chiang Rai as his new capital in the Kok River basin. In 1287 King Mengrai made a peace pact with King Ramkhamhaeng of Sukhothai and King Ngammueang of Phayao to defend their lands against the Mongol Empire. In 1292 he defeated the Mon kingdom of Hariphunchai (present day Lamphun), adding the city to his kingdom. Yiba, the last king of Hariphunchai, was forced to flee to Lampang.

In 1296 King Mengrai moved his capital again by founding Chiang Mai on the western bank of the Ping River. A few years later, Yiba’s son, King Boek of Lampang, attacked Chiang Mai with a large army. However, King Mengrai and his second son, Prince Khram, fought back against the Lampang army. In a personal combat on elephant back between Prince Khram and King Boek at Khua Mung, a village near Lamphun. King Boek lost and ordered the withdrawal of his remaining men. As King Boek fled by way of the Doi Khun Tan mountain range between Lamphun and Lampang, he was caught and executed. When King Mengrai’s troops occupied the city of Lampang, King Yiba was made to flee again, this time to Phitsanulok.

King Mengrai died in 1311 at Chiang Mai. During a thunderstorm he was hit by lightning in the city’s market. He was succeeded by Prince Khram who took the name of King Chaisongkhram upon his ascension to the throne of the Lanna kingdom.

To this day, the residents of Chiang Rai revere King Mengrai – or Por Khun Mengrai – as he is known locally, the father of Chiang Rai. There is a week-long annual festival in his homour, and people pay home as his shrine (top photo).