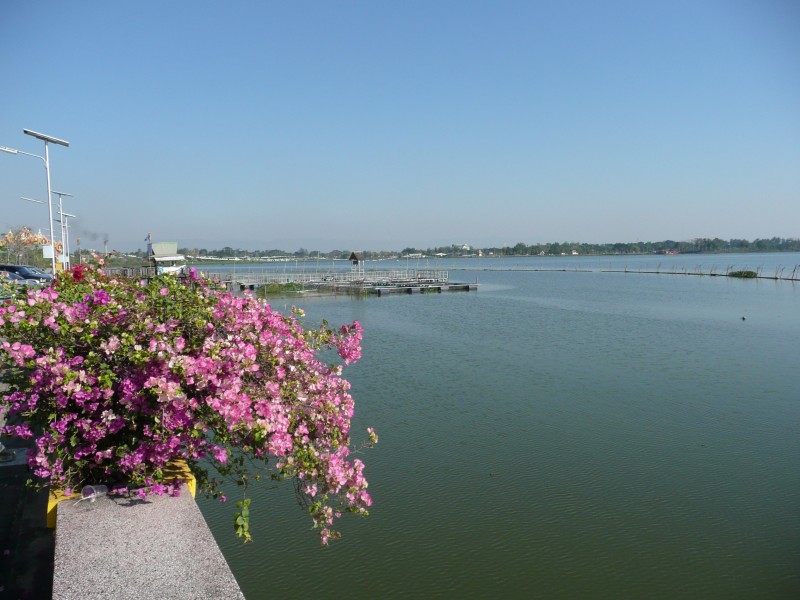 The word “kwan” in “Kwan Phayao” means lake or big pond and is used exclusively in the Phayao Province of Lanna. According to the Venerable Phra Thammavimonmoli (Puang Vongruang), the Abbot of Wat Sri Khom Kham in Phayao town and Deputy Chief of Ecclesiatical Region 6, the word “kwan” here may be derived from another version which, in common Thai dialect, means to pull.

In this sense, it is to pull water from various small ponds, swamps, rivers and waterways into one area. In other regions (e.g. the Northeast), “kwan” has other meanings, one of which is the village’s pavillion or gathering hall. This is usually a place for common use. It may be concluded that
“kwan” in the broadest sense denotes the gathering place for water from various sources.

The Legends of Kwan Phayao

Before the dam was built on the Ing River in 1941, Kwan Phayao was a low-lying wetland dotted with ponds and swamps of various sizes, interconnected by small waterways. One of the most prominent ponds was “Nong Lang” which is now a part of the kwan behind Wat Sri Khom Kham. There are 2 stories in the Prachum Phongsawadan (Collected Chronicles) Part 61, recounting the origin of the name…

During the time when Bodhisatva was incarnated as a myna bird dwelling on Doi (Mt) Chom Thong, he went to bathe and feed every day at a pond. One day, while enjoying hinself at the pond, he fell prey to a hawk and was killed. Hence the pond was named “Nong Lang” or the “Myna Pond.”

Once apon a time, Phra Ruang – the King of Sukhothai – paid his friend Phya Ngam Muang, the King of Phayao, a visit. There he committed adultery with his friend’s principal queen. When this unfortunate incident was reported to Phya Ngam Muang, he ordered his troops to pursue and capture Phra Ruang.  Taking flight, Phra Ruang transformed himself into a myna bird. Possessing more magical power, Phya Ngam Muang managed to bring the myna bird down. It fell into the pond which was later named “Nong Lang.” Before 1941, Kwan Phayao was a vast area of lowlands. The River Ing flowed through the area, creating many large ponds called “nong” and smaller ones called “buak” such as; Nong Chang Daeng, Nong Ya Ma, Nong Lang, Nong Wua Daeng, Nong Niao, Buak Kangkeng, Buak Tum, Buak Phak Chik and Buak Kung. These ponds were connected with each other by small waterways such as; Mae Rong Noi Hang, Rong Hia, Rong Rua, and Rong Mae Hai. These were connected in turn to the Ing River.

Between 1939 and 1941, the Department of Fisheries, Ministry of Agriculture, constructed a dam on the Ing River where it exits the lowlands at the southeastern corner. This is where Highway 1 crosses the river at the entrance to Phayao town.

Consequently, the lowlands became a large, shallow reservoir with a surface area of about 17 square kilometres, a little over 10,000 rai (1600 hectares) of land.

In 1941, the Department of Fisheries established a fisheries research station at Kwan Phayao to breed fish for the lake as part of the campaign to increase the availability of cheap protein diet for public consumption. Soon fishing became an occupation of many local people, supplying fish to
neighbouring communities. Aquatic flora from Kham Phayao are also used as animal feed.

In 1957, the Provincial Waterworks Authority installed a water supply system at Kwan Phayao and since 1958 it has offered its water supply service to the public.