The statue commemorates a former king of Phayao, or Phu Kam Yao, who was in power some 700 years ago. 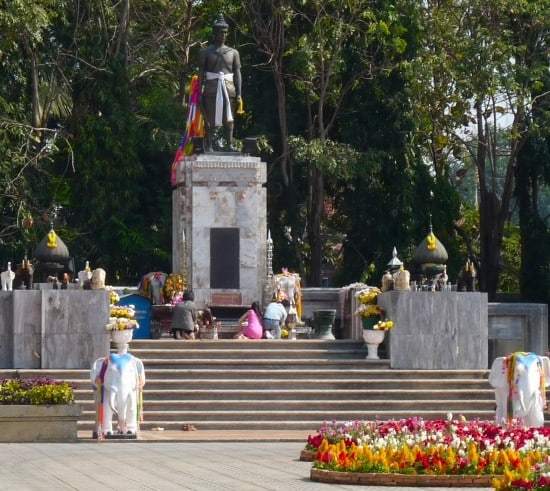 During the reign of King Ngam Muang, the state prospered and expanded its territory. A close ally of King Mengrai, the ruler of Chiang Rai, and King Ramkhamhaeng of Sukhothai, the three kings formed a mutual alliance.

Por khun Ngam Mueang was the 9th king of Phu Kamyao Town during the very prosperous period of 1258 – 1298. The king drank the oath of friendship water together with Por khun Mengrai of Chiang Mai Kingdom and Por khun Ram  Kham Haeng of Sukhothai Kingdom. The three kings conducted this oath-taking ceremony by the Ing River, within the compound of the Phayao Fresh-water Fishing Station nowadays.

On 5 March of every year, a ceremony is held to commemorate Por khun Ngam Mueang.

Location:  in the public park on the shores of Kwan Phayao.

The Phayao Fresh-water Fishery Station, on Highway No. 1 in town, is the first facility in the world to successfully breed Pla Buk, the giant catfish. There is an aquarium displaying many species of fish and waterplants. Open during official working hours. 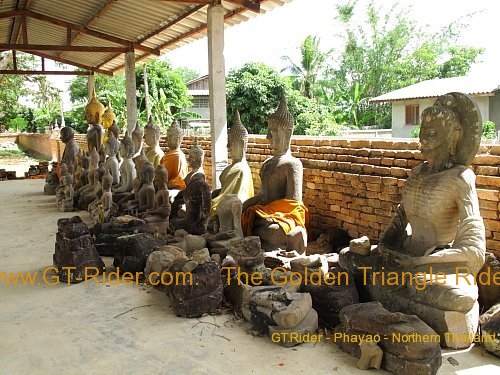 Wiang Lo is an ancient town dated from 500-600 years ago by a stone inscription and sandstone Buddha images excavated at Wiang Lo.  The old Wiang Lo city has a moat and city wall, plus approximately 10 ancient sites, and another numerous other sites outside the city moat. The important sites are abandoned temples. The main temple is Wat Si Ping Muang beside the Chun river. There is a museum hall with a large collection of  ancient utensils, pottery, implements, and Buddha images beside Wat Si Ping Muang,

This cultural centre is about 15 kilometres from the district town of Dok Kham Tai on the way to Chiang Muan district. It has a large collection of native agricultural tools and implements as well as ancient objects from which the cultural lifestyle of the Lanna people in the past can be studied. One kilometre before the Centre is a park shaded by large trees with caves of hanging and protruding rock deposits.

The Phayao Jewellery Centre is situated at 140 Mu 6, Ban Mai, Mae Ka Sub-district, on Highway 1 (Phahon Yothin Road) at Km. Marker 723, 14 kilometres from the centre of town. It was established as an occupational training centre for the jewellery and accessories making processes, to provide employment for the youth and the general public in Phayao and nearby provinces.

It provides information on the jewellery industry, receives educational trips to witness the gem-polishing processes and silverware making, as well as displays. The centre has jewellery, accessories, handicrafts, OTOP products and quality products of Phayao for sale. For further information, please contact;