Mae Puem National Park covers an area of 222,500 rai in Chiang Rai and Phayao Provinces. Much of the park is steep mountain ranges in the watersheds of the Mae Kaeo and Mae Puem Rivers. It comprises dry evergreen forest, deciduous dipterocarp forest, pine forest, and mixed deciduous forest. Plants found in the park include;

There are more than 40 species of birds, plus other fauna including barking deer, wild boars, fishing cats, mouse deer, etc.

Doi Phu Nang National Park is located in Dok Kham Tai / Pong & Chiang Muan Districts, and covers 462,775 rai. The parks undulating mountain ranges encompass dry evergreen forest, mixed deciduous forest, and deciduous dipterocarp forest. The park has various kinds of fauna such as soft-shelled turtles, monitor lizard, and a variety of birds. This national park is the habitat of the largest number of peacocks in the North, and also of the last flock of Thai green peafowls of the Indo-china subspecies. The peafowl breeding period is in January – March.

Interesting tourist attractions in the national park are as follows:

How to get there:

Kaeng Luang Dinosaur Forest Park is at Mu 7, Ban Nong Klang, Ban Mang Sub-district. There are fossils of a Sauropod, an herbivorous dinosaur with a long neck, long tail, which walked with 4 legs. The fossilized bones of the dinosaur are at least 15 metres long, with a weight of more than 100 tonnes, and a height of more than 100 feet. It is estimated to have lived not less than 130 million years ago and is considered an important piece of world historical evidence. 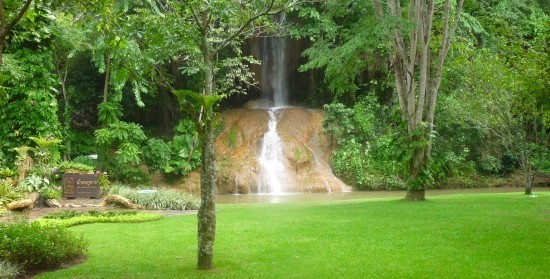 Namtok Phu Sang – a 25-metre-high limestone waterfall. The water is 33C and clear, without the smell of sulphate, and is suitable for bathing. The waterfall is located by the road, 300 metres from the Office of the National Park. More information…