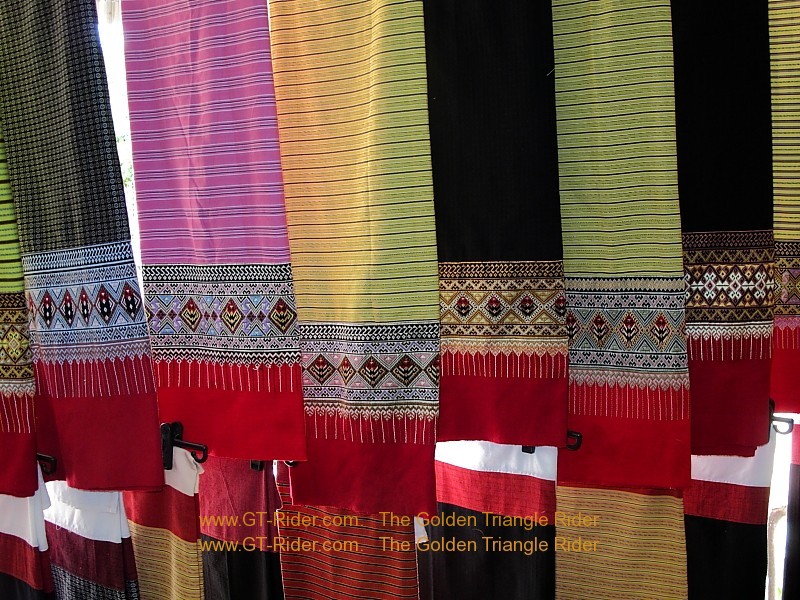 Mae Chaem is justly famed for its production of pha teen jok, unique for its original patterns, vibrant colours and weaving style. Distinctive Mae Chaem fabric is dominated by reds and yellows and other vibrant-coloured threads. Traditionally commanding high prices because of the special weaving technique, the Mae Chaem pha teen jok is thickened so that each piece of cloth automatically becomes double-sided. The edge of the cloth is traditionally sewn only with black or white thread.

These were a luxury item, worn by wealthy ladies or those who knew how to weave their own cloth, and worn for special occasions only. This complex craft was taught mother-to-daughter, with the designs committed to memory and handed down through generations of farming families in the southern part of Mae Chaem. A piece of teen jok costs upwards of 1,800 baht, the price being dependent on the design and colour complexity. But despite a more affordable price, teen jok is now worn primarily by the elderly and outsiders.

In the late 1950s, the locals in Mae Chaem natives virtually gave up their traditional weaving, and looms were retired in favour of far more lucrative opium farming efforts. With a choice of weeks of weaving intricate pha teen jok patterns for a meagre 50 baht, or far easier and larger revenues from planting opium, waeving fell by the wayside..

It was not until the 1970s that pha teen jok made a comeback in the livelihood of Mae Chaem locals. As part of royal project encouragements and government crackdowns on opium production, villagers were urged to resurrect traditional handcrafts to nuture a growing tourism industry. Pha teen jok production was modernised as part of a Royal Project, introducing softer colours and the more affordable Chinese silk, making what was previously a luxury item, more available to all.

Mae Chaem has an annual Teen Jok festival in February that is well worth going to.