A large evening produce market starts up on Jettabut Rd (near the Honda dealership) from early to late afternoon. This is the largest and most comprehensive market in Nan. Several food stalls counters feature more than 20 dishes. The northern half of the market sells non-food items like belts, handsaws, and motorcycle helmets.

Anonta Worarittidit Rd. hosts markets along its sidewalks in the morning and at night. The morning market sells everything from pineapples to small turtles. The night market, primarily a row of food stalls next to the road, starts around 6pm, on Anonta Worarittidit Rd. outside the 7-Eleven, and extends around the corner on Pha Kong Rd and is open until around 9pm.

Thai Payap Project has hill-tribe handicrafts from more than a dozen villages at the Hattasin Shop on Mahawong Rd., opposite the post office. Open daily 9am-5pm.

There are no English signs, but look for the wagon wheels in the stone fence surrounding the parking lot

Ban Huai Kon Border Market is in an area of the Ban Huai Kon Checkpoint, opposite Mueang Nam Ngoen, Sayaboury province, Lao PDR., 138 kilometres from Mueang Nan district. The market is open on Saturdays from early morning until nearly noon. Offered products are woven fabric in the Nam Lai design, the handicraft of the Thai Lue people, consumer products such as things from forests, Luk Tao or Luk Chit – Arenga pinnata, etc.

The Thai and Laotian people are allowed to visit this checkpoint everyday from 8.00 a.m. – 5.00 p.m.

Ban Bo Suak in the past was an important production venue of glazed ceramics in Nan province. The production pattern and process of this place are unique.

It is assumed that the ceramic products from Ban Bo Suak were once popular due to their discoveries in the burial grounds of the people in the past, especially along the mountain ridges from Omkoi district in Chiang Mai to Tak and Kamphaeng Phet provinces. It is assumed that the production of the Bo Suak ceramics was originated and developed during the reign of Phraya Phonlathep Ruechai (1528-1559) which was the glorious period of Nan. The knowledge of kilns and glazed ceramics of Nan was influenced from Lanna such as San Kamphaeng Kilns and Kalong Kilns which are kiln sites near Chiang Mai.

Location: Amphoe Bo Kluea
The Rock Salt Pits are 80 kilometres from Mueang Nan. Apart from agriculture and farming, people of Bo Kluea district also produce salt. The salt pits are usually closed during Buddhist Lent due to the rainy season. 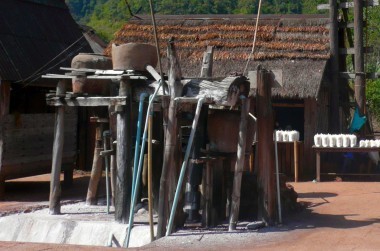