Sights To See in Nan

Location: Amphoe Pua
To the north of Nan along Highway No. 1080 in Nong Bua district and with a further distance of 25 kilometres on the route to Bo Kluea district lies the Doi Phu Kha National Park. The terrain is mainly forested lands on limestone mountain ranges, the source of several streams which merge into the Nan River. The elevation is about 1,900 metres above sea level. 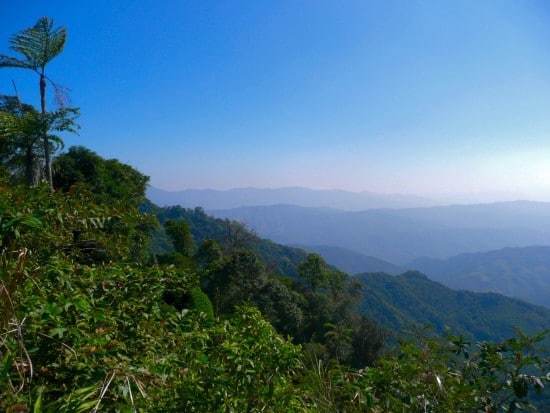 Here are found several rare and near-extinct floras, particularly the Chomphu Phu Kha, whose pink flowers are in full bloom during February. In the morning, a sea of mist can be seen drifting across the valley. There are also several scenic waterfalls. Permits to camp can be applied for. Alternatively, tourists may choose to utilise the accommodation services in the park.

The best way to explore Doi Phukha National Park is by motorbike. There is a lovely 5 – 7 hour loop ride on well-paved back roads. You’ll need a detailed regional map, sunblock and water. Its mountainous – make sure the motorbike you’re renting has good brakes! A helmet with a drop-down visor is advisable, and it’s a good idea to fill up the gas tank in Nan – there are gas stations in Ban Bo Klua and Pua.

Each segment of the motorbike ride through the national park showcases a different aspect of Nan province’s famed landscape. The gradual climb on Route 1169 passes smiling farmers working on the hillsides. Narrow ridgelines, surrounded on all sides by views that stretch for kilometers, characterize the ride on Route 1081, which eventually weaves down to the tiny brookside village of Ban Bo Klua.

The town’s natural salt pits are truly excellent. Route 1256 leads to Pua (47km), runs directly through Doi Phukha National Park, and goes over a couple of mountain ridges. You’ll pass a large shrine on your left 15km from Ban Bo Klua, the famous Chomphu tree, and a camping area with a viewpoint and nature trail. The park office, 3km past the camping area on the right, is next to the park’s main entrance (admission 200?). Pua is 25km farther along Route 1256.

Location: Amphoe Pua
Located at Tambon Silalaeng, about 69 kilometers from the provincial town, Pa Klang is a village of Meo, Yao, and Thin hill-tribes. After the eradication arrival of the communist insurgents in Nan in 1968, the tribes were separately settled in their former lifestyles producing beautiful handicrafts for sale to visitors.

Location: Amphoe Tha Wang Pha
40 kilometres to the north of Nan on Highway No. 1080, 3 kilometres after the left turn into the village in Tha Wang Pha district. The Thai Lue people living at Ban Nong Bua are noted for production of traditional tribal fabric, an art handed down for generations. Improved designs retain the original patterns. The native-woven materials are popular tourist souvenirs.

The national park is in Mae Charim district, 60 kilometres from Mueang Nan along Highway 1168 and 1243, covering an area of 270,000 rai or 432 square kilometres. Geographically, they are undulating mountain ranges, an origin of a tributary flowing into the Nan River at Wiang Sa district. It comprises hill evergreen forest, deciduous dipterocarp forest, and mixed deciduous forest, as well as, various kinds of wildlife.

Attractions within the National Park:

Attractions within the National Park:

Attractions in the National Park:

Doi Pha Chi take Highway No. 1091 from Nan, for 40 kilometres until reaching Ban Luang district. Take Highway No. 1172 through Ban Phi Nuea and Doi Pha Chi for 30 kilometres. Doi Pha Chi can be accessed by walking from the Nanthaburi National Park at the connection point between Nan and Phayao provinces. Doi Pha Chi is a beautiful mountain with abundant waterfalls and various plant species. Doi Pha Chi was once a stronghold of the Pho Ko Kho Communist insurgents. At present, equipment such as the electricity generator and water pipes still remain in the area. There are villages of the Hmong and Mien hill-tribes.

Doi Wao is a nice viewpoint spot to admire the sea of fog and the sunset. The area was once a depleted forest but has been revived by the Watershed Development Unit byre-afforestation with wild apples, maples, and Pinus kesiya. Prior to Doi Wao, visitors will pass Doi Tio which is another well-known tourist attraction within Nanthaburi National Park, andincludes the Hmong villages at Ban Doi Tio and Ban Sop Khun.

Location: Amphoe Muang
This arboretum is located 12 kms from the provincial municipality on Highway No. 1080. There are several caves in the arboretum area worth visiting by nature lovers.

Location: Amphoe Mae Charim
The Wa River is situated among the dense forest of the Mae Charim National Park. Rafting along Nan Wa River takes about 2-5 hours, starting from Ban Nam Pu in Amphoe Mae Charim to Ban Hat Rai in Amphoe Wiang Sa. The best season for rafting here is from October to February. Some travel agents in Bangkok and Nan organize rafting trips along Wa River.

Location: Amphoe Na Noi
is a natural geological occurrence located about 10 kms from Na Noi district on Highway # 1083. The site is characterized by a large earthen mould eroded by the elements through the ages, leaving only hard earthen columns, whose exotic shapes and forms alt=””can be interpreted as differently as the imagination goes.

Location: Amphoe Na Noi
This is a cliff located within the Si Nan National Park, reached by taking the Nan-Wiang Sa-Na Noi route for 135 kms then turning into Highway #1083 and on for another 22 km. The cliff-stop offers an excellent viewing point to enjoy a panoramic vista of the mountains.

Pak Nai was originally a village by the Nan River. After the construction of the Sirikit Dam, the village became a part of the water reservoir above the dam with characteristics similar to a large lake surrounded by green mountain ranges. The locals of Pak Nai village are fishermen. There are also restaurants on rafts providing fish from the dam to be tasted such as Pla Kot – catfish, Pla Bu – gobies, Pla Khang – Giant Catfish, Pla Raet – giant gourami, Pla Thapthim – Thai Red Tilapia, etc. Some rafts also provide accommodation for tourists.

From Ban Pak Nai, visitors can rent a boat to travel along the Nan River to the Sirikit Dam and admire the scenery of beautiful mountainous forests, islets, and fisherman’s raft houses. Out of the rainy season, there will be a pulled-raft service to Wat Pak Nai, where visitors can enjoy their meal on board. The trip takes approximately 2 hours. Moreover, there is a ferry service to Nam Pat District, Uttaradit province.

Location: Amphoe Pua
This is regarded as a most beautiful waterfall, located in Tambon Sila Phet, Amphoe Pua.

The Heroes of Thung Chang Monument

Location: Amphoe Thung Chang
It is a monument dedicated to government officials, policemen and soldiers who lost their lives in protecting the homeland from communist insurgents in Nan. It took 3 years to build and is situated in Amphoe Thung Chang alongside the Nan-Thung Chang Road on a low hill amidst large and small valleys. The nearby area with a pond and some tropical flowers serves as a public park for locals.

Head out on Highway 1083 for approx 6 kms. The site has soil formations in strange shapes, similar to the “Phae Mueang Phi” of Phrae Province. From geological evidence, it appears that Sao Din Na Noi was created by the movement of the earth’s crust during the late Tertiary Period, and the natural erosion of water and wind.

Geologists assume that it might be aged during 10,000 – 30,000 years and was once the bottom of the ocean. Discoveries of stone bangles and ancient axes have been made here, currently preserved at the Nan National Museum, indicate that this area was inhabited in the Palaeolithic Age.