Wat Analayo is on Doi Busarakham, approx 17 kms  west of the town. It is located directly across Kwan Phayao from the Por Khun Ngam Muang statue on the waterfront. This beautifully decorated temple complex  has an area for Buddhist instruction and meditation. Built under the direction of Thai monk Phra Kru Phaiboon, it contains many structures including a large sitting Buddha image in classic Sukhothai style. 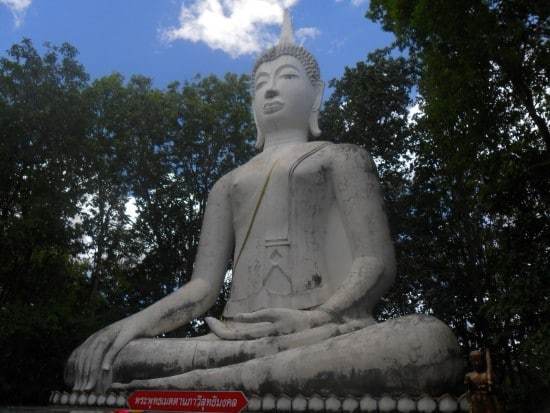 The Rattana Chedi is in the Indian Bodh Gaya style of art, whilst a Chinese-style pavilion – Kuan Yin Bodhisattva – has a Buddha image hall where a golden replica of the Emerald Buddha image is enshrined, plus others made of topaz, silver, gold, and gold-silver-copper alloy.Many other images in various postures are ‘protected’ by a seven-headed Naga style statue. In a few places along the ridgeline, Kwan Phayao and the town can be glimpsed. It is possible to drive your car to the upper entrance to the main complex.

The temple was constructed in the late 1990’s for a much-revered abbot, who was once visited annually by the King. The grounds are filled with religious statuary, including Buddha images from various Thai eras, and representations of Hindu gods such as Vishnu and Shiva. A small viham at the summit holds silver and gold Buddhas presented by the king and decorated with diamonds and emeralds. This viharn also contains a large elephant encrusted with Ceylonese gems, donated by the Sri Lankan government. 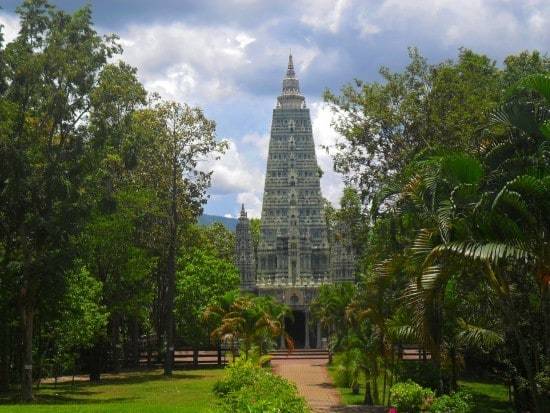 There is a network of roads, ridges and temples up here, and its possible to spend hours exploring. From the hilltop with the bronze Buddha, there is a nice view of Kwan Phayao, the paddy fields and the town.

How to get there:

Travel approx 7 kilometres north of town on Highway No.1, then turn left onto route 1193. After approx 9 kms, there is a right turn  onto a smaller road that leads to the hilltop temple of Wat Ananlayo. Covering an extensive area along the ridgeline, under leafy canopies of large trees, it features building and sculptures of religion-based characters by contemporary craftsmen of great skill.