Wiang Kalong ceramics factory, village and temple offer a glimpse into the Lanna Kingdom’s rich cultural and artistic history. When traveling north on Highway 118 from Chiang Mai to Chiang Rai, a brief side trip can be made from the northern end of Mae Kachan, turning right on Highway 120 for approx 3 kms to the village of Wiang Kalong, in the Wiang Pa Pao District of Chiang Rai province. 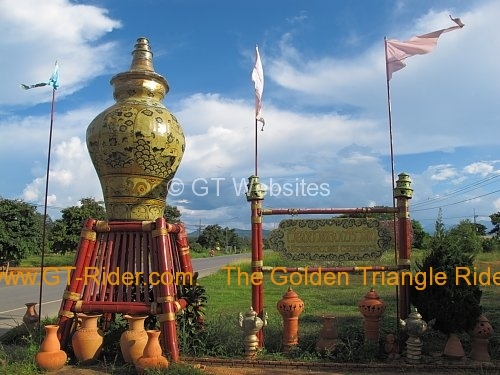 Almost opposite is the entry into the Wiang Kalong temple complex which includes a scale model of the old town.

Well known to serious antique ceramic collectors world-wide for premium examples of ancient ceramic arts, the village itself has attracted few visitors. Successful efforts have been made to revive high quality Wiang Kalong ceramic production, and to promote the modern reproductions to attract collectors and tourists.

The Wiang Kalong village area covers the ancient town which dates back to the 15th / 16th century AD. The remnants of triple-lined moats, ramparts and 3,000+ kilns are visible. Most of the original kilns were looted to meet demands of ceramic collectors from abroad.

Wiang Kalong ceramics are unique because of;
– the high quality of the local white clay
– lightness and delicacy
– the glaze that creates natural fine cracks
– the hand painted Buddhist designs

In dating Lanna kilns, it was previously assumed that ceramic production ended with the fall of Chiang Mai to Burmese forces in 1558. More recent research into the Kalong kilns (Yajima 2007) suggests the European-introduced production of white pipes for tobacco indicates that the kilns may have been active at least as late as the 17th century .

The fine-grained white clay body is a distinguishing feature of Wiang Kalong ceramics. In addition, the Wiang Kalong potters also applied a white slip coating under the light gray-green glaze of their celadon wares. Further, the use of a “chocolate base” on some Wiang Kalong celadons shows knowledge of  Vietnamese techniques. Both the form and underglaze iron painting on Kalong dishes and bowls denotes an awareness and close study of the Chinese cobalt-decorated porcelains.

Research by Yajima suggests that the Lanna ruler sent envoys to Ming China in the late 15th century, enabling the importation of Chinese blue-and-white ware from Jingdezhen and other ceramics production regions within China. (Yajima 2007).

“Wiang Kalong” means “The town where the crow got lost” – from the ancient tales of The 5 Lord Buddhas. In this legend, a white crow left her 5 eggs unguarded whilst seeking food in Wiang Kalong. Losing her way home during a storm, she finally returned the following day to discover that all of her 5 eggs had fallen, and were lost into the river. The white crow searched unsuccesfully for her young, and eventually died of grief. The five boys in those eggs were separated by the storm, but were joined together later in life as young men, studying under the same teacher. Subsequently, they entered a monastary as novices and, in the fullness of time, became the Five Lord Buddhas.

Aspects of technology hint at a more direct connection to China. The vessel-making process involved shaving the thrown form to make the already thin walls even thinner (Shaw 1989, 44) —a procedure also practiced by porcelain makers at Jingdezhen and related kilns in China. Archaeologist Mikami Tsugio observed that the Kalong kiln structure resembled Ming-period kilns at Jingdezhen (SPAFA 1985, 473). In addition, the potters appear to have used a Chinese-style two-step process of bisque firing and high-temperature firing (Shaw 1989, 44; Yajima 2007). The distinctive use of copper-green lead glaze on vessels made at the Tung Man kiln group (Shaw 1989, 51) —a procedure not known anywhere else in the region—also suggests some sort of on-site instruction from a Chinese potter, perhaps one associated with the Zhangzhou kilns in Fujian and brought to the region by an overseas Chinese merchant.