Until the mid-1970s, Doi Mae Salong was strictly off-limits to visitors. From around 1994, Santikhiri’s doors have creaked slowly open… and the ridgetop town has been successful at leveraging its fascinating history, climate and scenery to develop a popular tourist attraction. Narrow streets are lined with guesthouses, noodle shops and teashops. 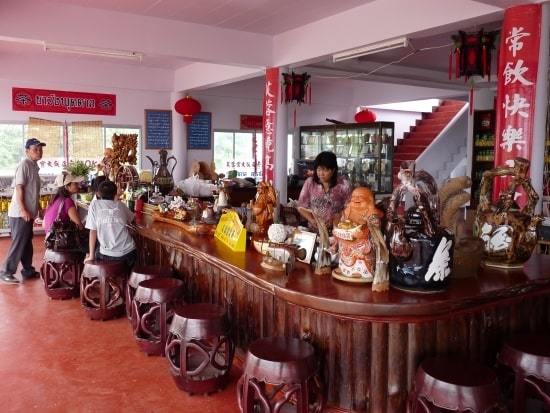 By virtue of those efforts and its natural attractions, Doi Mae Salong (Santikhiri) has become one of Thailand’s top destinations. The backpackers are far less obvious. Nowadays, a constant stream of Chinese from Taiwan, Hong Kong, Singapore, Malaysia and China make pilgimages to this mountain refuge to take in the history, ambience and hospitality.

The former soldiers have long since retired from active duty! They settled down, some of them married ethnic Chinese brides who crossed the border after the fighting stopped, and others having married local Thais. The old soldiers and their descendants go about a peaceful lifestyle, and maintain their Chinese identity; you will still hear the old-timers speaking Mandarin.  On General Tuan’s death in 1980 General Lue Ye-tien, then aged 90, and General Tuan’s former right-hand man, became the leader of the group.

The Thai Government’s crop substitution programs successfully coaxed the inhabitants to cease cultivation of the opium poppies that had previously been grown. These days, there are plantations of high mountain Oolong tea, coffee, corn and fruit trees!

New fruit orchards and tea factories have blossomed, followed by production facilities for production of fruit wines and Chinese herbs. These benign products are extremely popular with domestic Thai tourists and the Chinese international visitors that arive year-round from Taiwan, from Chinese communities throughout S.E. Asia and from modern-day China!

Santikhiri has long been the home of many hill tribes such as the Akha, Yao, Karen, and Hmong that originated from southern China and Myanmar. Each tribe has its own language, and follows animist customs and practices. Living among the native inhabitants are the ethnic Chinese, who form the majority of Santikhiri’s estimated population of 20,000.

Santikhiri is accessible via two routes;

Regular songthiew (pickup-style taxis) and minibus services run from 6 am to 4 pm between Chiang Rai and Doi Mae Salong.

According to a couple of genial local guesthouse proprietors, there is no “Low Season” for tourists to Doi Mae Salong… which is as it should be!