Wat Phra That Doi Chom Thong has undoubtedly been a sacred site for a very long time, revered as the home of local spirits long before Buddhism arrived in the area. 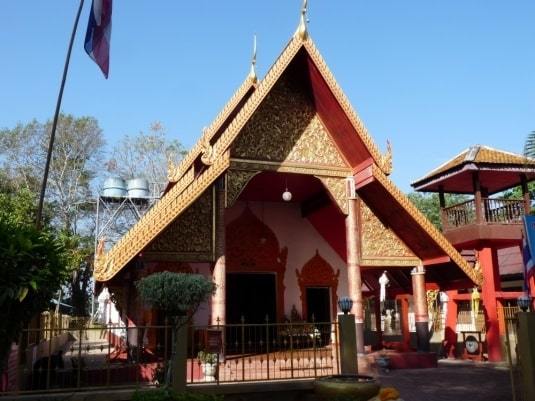 As in many Thai wats, Spirit Houses coexist happily with the newer Buddhist shrines. Elephants are part of the lore of Doi Chom Thong. King Mengrai was said to have been following an elephant that had wandered off when he first came upon Doi Chom Thong, a solitary hill on the banks of the River Kok. 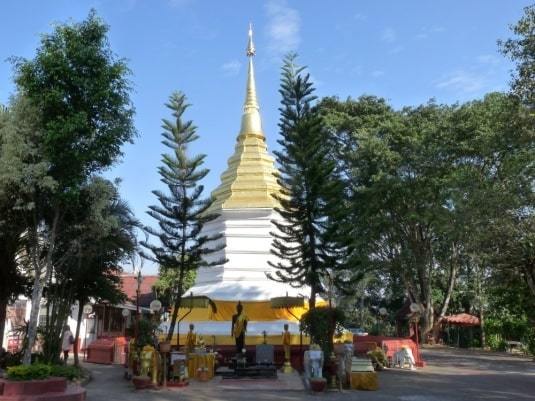 A chedi is located in the center of the temple grounds, and is the focal point of the temple. This chedi was constructed in a mix of Bhu-kam (Myanmar) and Lanna style. It is approx 14 meters tall and the lotus-petal base, the body, the bell and the top spire of the Chedi were decorated with gold foil.

According to the Yonok Chronicle, the That or Chedi was originally built in the year 940 during the reign of Phraya Ruen Kaew, Prince of Chiang Rai, to house the Lord Buddha’s relics.

Later, in 1260, King Mengrai was said to have visited Doi Chom Thong where he viewed the surrounding area and found it suitable for the establishment of a city. He then ordered the beginning of the construction of the city of Chiang Rai and had Wat Phra That Doi Chom Thong restored.

In 1992 (B.E. 2535) the City Pillar was moved from Wat Klang Wiang to Doi Chom Thong where it is known as Sadue Muang, the Navel or Omphalos of the City. (above)

Adjacent to Wat Phra That Doi Thong are located 108 city pillars of Chiang Rai, built in 1988 to honour King Mengrai, and in celebration of King Bhumibol’s 60 th birthday.The pillars were constructed and placed in accordance with traditional Lanna beliefs, and reflect a combination of Buddhist and Hindu theology. The main pillars on the outer corners are 5 feet thick and match the king’s height. 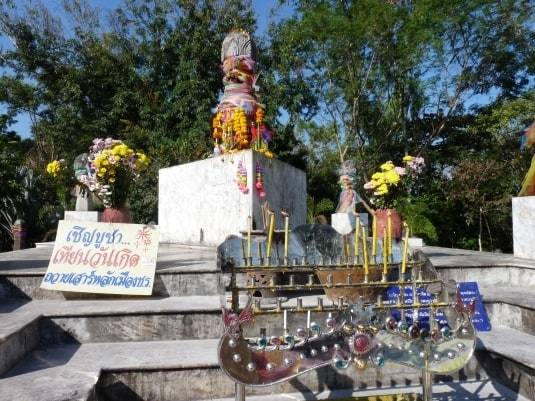 The internal pillars are arranged in several tiers of circles and symbolise the universe, with Sumeru Mountain in the center. The five water troughs arranged around the outside represent the five oceans (the traditional Pancha Mahanathi), with Nirvana at its highest reach.