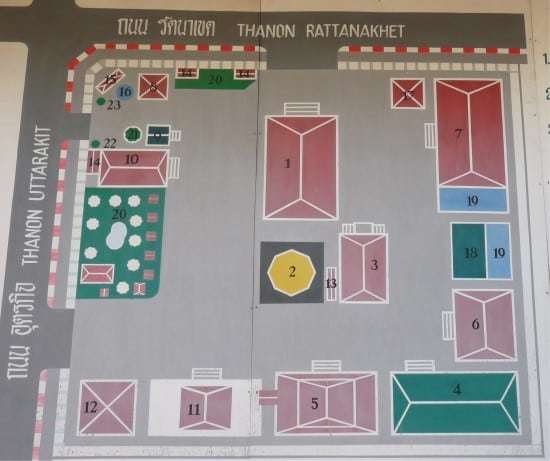 Important structures and elements within a Thai wat or temple may include;

A Wat is a Thai Buddhist temple or monastery, usually a collection of buildings, shrines, and monuments with different architecture, function and importance within a walled courtyard. Temple architecture relates to both the historical period when the temple compound was constructed, and to the ethnic origin of the community in which the wat is located. Northern Thailand temples are predominantly constructed in Lanna style, but there are also Tai Yai (Shan) and Tai Lue (Sipsongpanna) influences, as well as traces of Ayutthaya and Sukhothai design concepts.

Thai temple complexes come in an variety of shapes and sizes, but they all share the same set of basic elements. Every temple must have a Ubosot (Bot) which is surrounded by six or eight Dai Sema boundary stones, and will often have one or more Viharn housing an important Buddha image.

Wat Names: The wat name often indicates status – for example, a wat with “Phra That” in the name indicates that it houses a relic of the Buddha.

Usually, there are three primary areas within a Thai Wat compound; a Ceremonial area, a Public area, and a Living area for the monks. The layout, scale and complexity of such areas varies markedly between Wats.

The Thai term for this area is the Phuttawat and this is where the ceremonial and devotional activities take place, and where the principal Buddhist statues are located.

The Viharn (Vihara, Wiharn, Wihara) serves as the sermon hall and is often the busiest building in a Wat complex, although sometimes smaller than the ubosot. The Viharn is open to all, but it is disrespectful to not be properly dressed. Just like the Ubosot (Bot), the Viharn usually has an altar and one or more Buddha images and there are worshippers performing religious rites at most times of the day.

Unlike the ubosot, a Viharn does not have sema stones as a boundary. It contains (as does the Ubosot) usually one major and many smaller Buddha images. Many temples have more than one viharn.

A chedi is also known as a stupa or pagoda, and is usually a solid, tall bell or dome-shaped structure in which there might be relics of the Buddha, texts or a revered religious teacher may be buried within. Some temples have more than one chedi.

Throughout Thailand, there are chedi of classic types in various forms. The norm is a bell-shaped dome on a square throne surmounted by a low circular colonnade supporting the high and slender Chatra (umbrella). The 7 chedi arrangement at Wat Jet Yod in Chiang Rai is quite unique.

A Prang is an Ayutthaya or Khmer-style chedi is a tall slim spire and is usually elaborately carved. This feature was later adopted as an element in Thai religious architecture. Usually, a Prang has three niches and one entrance door facing a very steep staircase. The internal area sometimes contains Buddha statues.

Prangs can be found mostly at older temples in Sukhothai, Ayutthaya, Lopburi and in the Khmer temples in Isaan province (Phimai, Phanomrung). However this Khmer or Ayutthaya style structure can also be found in Bangkok (Wat Arun, Wat Pho, Wat Phrakaew). It is often described as having the shape and form of an ear of corn. An example of a Prang in northern Thailand is at Way Analayo, Phayao.

Rarely, and only when a Wat is incomplete / under construction, nine round stones about the size of a cannonball and known as “Luk Nimit” may be awaiting placement. Eight are covered and placed in the Bai Sema markers outside the completed Bot, and the ninth larger stone is placed under or in front of the main Buddha statue within the Ubosot.

The Sungkawat area within the Wat complex is the monks living area, and usually includes some or all of the following buildings;

A residential building where the monks live and sleep. Kuti come in lots of different shapes and styles from single simple wooden structures to modern interconnected blocks made of more substantial materials.
Kuti are the quarters for the monks that reside in the temple compound. They can come in all forms and shape.
Normally, Thai temples have the residential section of monks (Sangghavas). Kuti is monks’ living place and varied in several sizes and shapes with simply construction, and no any artistic features.

Also known as Ho Phra – this is the scripture hall or Buddhist library of the temple, the place in which religious texts are kept. It contains the Tipitaka (Teachings of the Buddha or The Buddhist Scriptures), other important Buddhist religious sacred manuscripts, and some holy objects.
A Mondop is usually a very small and highly decorated building, sometimes constructed above the library, and may serve as store room for holy objects used in religious ceremonies.

A kitchen and food storage area where offerings from the faithful are kept and if necessary cooked. Spare food is given to temple boys and animals.

Dining hall-may be used for other function too.

A place for studying Buddhist teachings.

Known as the Thoraneesong in Thai, it is often found at the back of a temple, and may house the crematorium and an open area for social activities. Northern Thai temples usually have a significant degree of separation between the ceremonial / living quarters of the Wat and the crematorium, which is often ornately decorated and is easily recognised by its long, slender chimney.

Thai temples are obviously places of worship, and when visiting a temple, you should be sensitive to any activities being conducted by the local people. Don’t be rowdy, be respectful and dress conservatively – especialy at sites of national or provincial importance. In rural Thailand, temples often accommodate schools, serve as community meeting places and are where funerals and cremations take place. As with any place of worship, you should always be considerate of worshippers and respectful towards monks. 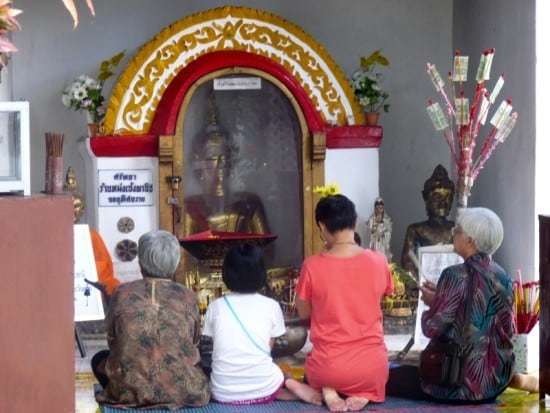